Pyramid Breweries to be acquired by Magic Hat

When R. Martin Kelly was chief executive of Seattle’s Pyramid Breweries a few years ago, he learned how cumbersome it is for a small company to be publicly traded.

Lawyers, accountants, paperwork and fees chew up time and money that could be spent on something more tangible, like making beer.

Kelly now runs a Vermont brewery, and on Tuesday it unveiled plans to acquire Pyramid for $2.75 a share, 56 percent above the previous day’s closing price.

Counting the Vermont brewer’s assumption of $10 million in Pyramid debt, the deal is valued at $35 million, according to executives and securities filings.

“They were spending a lot of money on being public that they couldn’t spend on being a brewery,” said Kelly, who left Pyramid in 2004 and is CEO of the privately owned Magic Hat Brewing Co. & Performing Arts Center in South Burlington, Vermont. 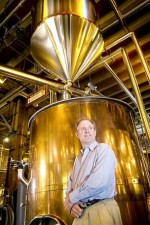 “This removes the shackles of being a public company and provides more opportunities for employees in the long run, being part of a bigger, more financially sound entity,” Barnum said.

Pyramid lost $1.8 million in the fourth quarter and $488,000 during 2007. It sold the Thomas Kemper Soda brand last year but continues to make soda for the new owner.

Earlier this month, Pyramid agreed to pay $1.3 million to settle a lawsuit alleging employees at three of its alehouse restaurants were denied adequate opportunity for meal and rest breaks.

Magic Hat sells beer in the East, while Pyramid’s sales are focused mostly in 13 Western states. At the moment, said Kelly, “we have no plans to change the way that business or our business operates.”

Barnum will leave after the deal closes, which is expected before Aug. 31. He said he expects Pyramid’s 500 other employees to keep their jobs.

Kelly was more tentative, saying Magic Hat needs to finish its “due diligence” – a process in which financial professionals go over the planned acquisition in detail – before he will know how the combined company might save money.

That process also will help decide whether the breweries begin producing each other’s beer, a move that would make Magic Hat beers available on the West Coast.

Pyramid is bigger than Magic Hat, producing about 200,000 barrels last year. It has large breweries in Portland and Berkeley, Calif., and operates alehouse restaurants there and in Seattle, Sacramento and Walnut Creek, Calif.

Magic Hat, known for quirky beer names like #9 and its annual Mardi Gras parade in Burlington, produced 102,000 barrels of beer last year. It was founded in 1994 and is still partly owned by co-founder Alan Newman. Among other owners is Basso Capital Management in Connecticut.

Magic Hat’s full name to the contrary, it does not have a performing arts center, Kelly said. The name is “part of our theatrical, irreverent take on the world,” which includes sponsoring performing artists.

After Magic Hat completes its due diligence and the companies reach a definitive agreement, the deal must be approved by regulators and Pyramid shareholders.

Pyramid’s sale comes at a tumultuous time for the beer industry, with many small breweries struggling with the high cost of barley and hops, and worrying that consumers will not pony up when their pricey beer becomes pricier.

Those factors helped spur the merger this year of Woodinville-based Redhook Ale Brewery with Widmer Brothers Brewing in Portland and, on a much larger scale, the combination of Miller Brewing with Molson Coors.

Although Anheuser-Busch, Miller and Molson Coors collectively own a whopping 80 percent of the U.S. beer market, smaller breweries have carved into their market share over the past decade or so, said Ann Gilpin, an analyst at investment-research firm Morningstar.

Big beer companies have been selective in buying craft brewers, she said. “While they certainly have the financial strength to do it, they thought prices were too rich.”

If the Pyramid and Redhook deals are an indication, smaller breweries might be more willing to bargain now.

“I fully expect to see more [deals],” Gilpin said. “Whether it’s more consolidation within craft beer like Pyramid and Magic Hat, or big beer buying craft brewers, it could go either direction.”