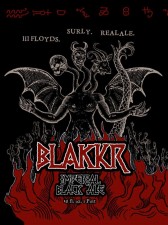 wing(Minneapolis,MN) – For a few years, we’ve been talking with our friends at Three Floyds Brewing in Indiana and Real Ale Brewing in Texas about making a truly epic collaboration brew. A few little things (like building a new brewery) got in the way, but we all finally made time to brew BLAKKR, an imperial black ale.

BLAKKR (an old Norse word for ‘dark’ or ‘black’) is being brewed at all three breweries, and will be distributed in our own markets. Real Ale’s BLAKKR will be available in four packs of 12oz cans, Three Floyds will be packaging the beer in bombers and we’ll be releasing BLAKKR in 16oz cans. The artwork for the collaboration beer was created by Surly’s artist-in-residence, Michael Berglund.

Watch the Interwebs in February for our release date announcement, and announcements on the release in Texas and Chicago.