(Alexandria, VA) – Port City Brewing Company announces the return of Derecho Lager, which debuted in 2012 as part of our limited release series, and now is part of our draft-only Lager Series. This brew gets its name from the derecho storm which barreled through the DC Metro region in the Summer of 2012 leaving the brewery without power for five days. Unable to control fermentation temperatures, a tank of freshly brewed pilsner was at risk of being lost. Realizing the beer would not meet the guidelines of a Bohemian Pilsner, we decided to experiment with the beer – keeping fermentation temperatures on the warmer side, and dry-hopping with Centennial hops. These non-traditional techniques paid off, and the result was the creation of our first “American Lager!” 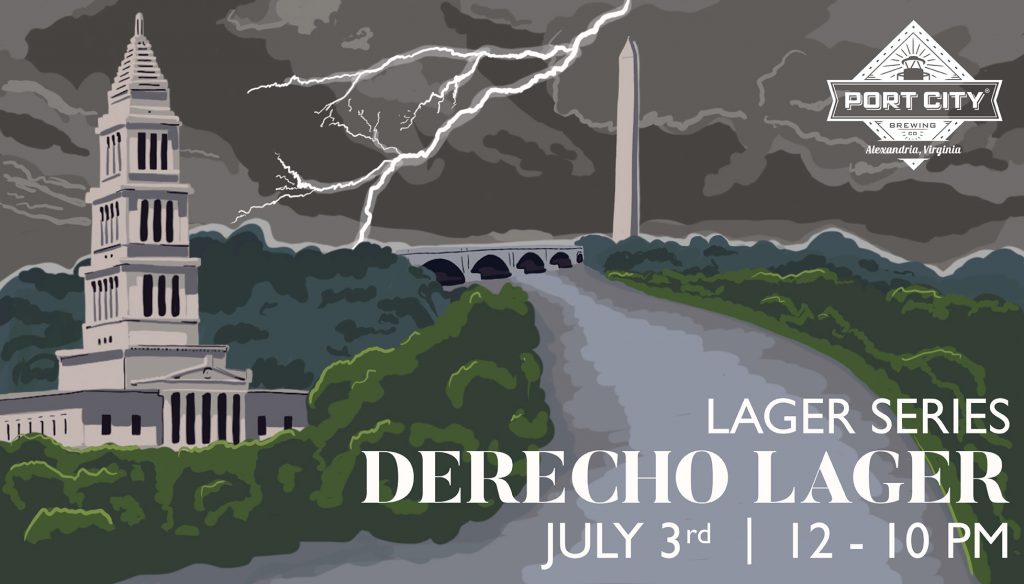 Since Derecho’s debut, our production team has refined the recipe each summer. The present formulation is our re-interpretation of a hybrid beer we are calling an India Pale Lager. Brewed with 100% Centennial hops, Derecho is brilliant gold in color, with bread like flavors from the malts, and citrus and pine notes for the hops. This lager has a medium body and finishes with a clean hop bitterness.

“What we’ve got here is a lager brewed with just four ingredients, fermented at ale temperatures, and dry-hopped with a quintessential American hop,” says Jonathan Reeves, Head Brewer. “The result is a stripped-down punk anthem of a beer.”

Derecho Common release party will be held on July 3 in the Tasting Room with market releases following.

ABOUT DERECHO LAGER
India Pale Lager 4.8% ABV, 43 IBUs
Available on draft and in bottles in the DMV
Website: https://www.portcitybrewing.com/the-beer-old/lager-series/

ABOUT PORT CITY
Founded in January 2011, Port City Brewing Company brews an exciting line-up of award-winning ales and lagers from our state-of-the-art facility located in the historic port city of Alexandria, Virginia. Our mission is to be a reliable and innovative brewer of delicious, well-balanced beers that celebrate their raw ingredients. 2015 GABF® Small Brewing Company of the Year. #WhatYourBrewerDrinks