(Seattle,WA) – Lou Gehrig died prematurely of Amyotrophic Lateral Sclerosis (Lou Gehrig’s disease), a progressive neuro-degenerative disease that leads to paralysis due to the death of motor neurons in the spinal cord and brain.

Pike’s No. 4 Session IPA was brewed for the Nationwide “Ales for ALS”™ promotion. Inspiration for the name came from the fact that Lou Gehrig’s New York Yankees jersey, bearing the No. 4, was permanently retired when he died. A very limited quantity of this beer was brewed and, with this tap label Pike honors Lou’s memory and hopes to raise awareness and encourage donations to research so that a cure for ALS might be found. 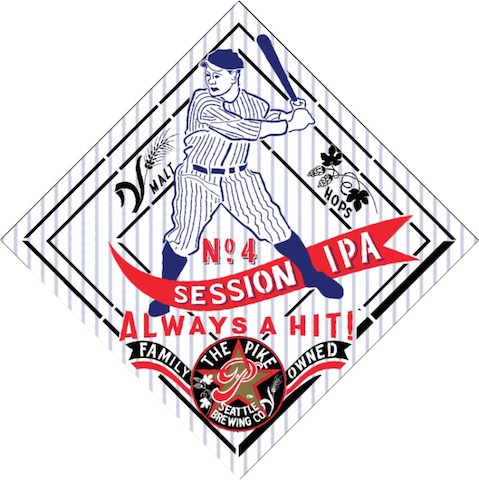 Pike is donating $1 for every pint sold at The Pike Pub, and we are encouraging our restaurant and bar partners to do the same. There will be select Pint Nights and Pike Beer Dinners around town where No. 4 Session IPA will be poured. Make it a hit by donating $1 donating to the cause. Individual donations are welcome too.

Pike No. 4 Session IPA is full-flavored with a lot of hop flavor and aroma, along with notes of citrus and stone fruit. At only 5.0% ABV IBU 40 OG 1.048, It’s a perfect beer for summer!

“Ales for ALS”™ was the brainchild of Loftus Ranches and Hop Union to support ALS research. They have offered participating brewers access to a proprietary hop blend, free of charge, in exchange for participation in Ales for ALS™. The ALS Blend is a combination of Mosaic, Citra, and four different experimental varieties, one of which is now named Equinox.

About Pike Brewing
The Pike Brewing Company is a family owned brewery located 1/2 block South of the entrance to the historic Pike Place Public Market. It is owned by Charles and Rose Ann Finkel, who founded the brewery in 1989.