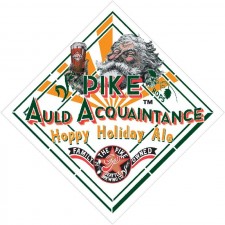 Pike Auld Acquaintance Holiday Ale is back, and like good friendships, it only improves over the years.

At Pike, we regard our head brewer as our best friend! In love with the craft, Dean Mochizuki applied his artistic skill to making this year’s Auld Acquaintance the best one yet! Taking the lead from Pike’s artistic directors, Rose Ann and Charles Finkel’s suggestion that we increase the amount of cinnamon and orange peel to give the beer more complexity and flavor; Dean did that and more, by tweaking the recipe with additional cassia bark (the bark of the cinnamon tree) and enhancing the sweet and Curacao orange peel with nutmeg and coriander. At the Pike Pub, we like to add a slice of orange on the side of the glass making it both festive and delicious. Balance remains our goal and Dean met the challenge and created this delicious amber beer to enjoy with friends; as an aperitif or to serve throughout the holiday meal.

First introduced in 1991, Auld Acquaintance has been Pike’s seasonal winter offering since 2006 when the Finkel Family reacquired the brewery after selling it in 1997. According to Charles Finkel, “We loved the beer business and wanted to reacquire Pike, in part because of many acquaintances we made. We have added many new friends since that time, and are honored that so many people are proud to wear our special sticker, declaring: “I Like Pike.” As a family-owned company we believe that making friends is one of the most important things that we can do.”

The Pike Brewing Company is a family owned brewery located 1/2 block South of the entrance to the historic Pike Place Public Market. It is owned by Charles and Rose Ann Finkel who founded the brewery in 1989.