(Pacific City, Oregon) – Dude! It’s back! Pelican Brewing Company re-releases the uber popular The Brewed Abides, a White Russian-inspirited Milk Stout, as its winter seasonal brew. Fellow fanatics eagerly snapped this one up when it was first released last winter—so Pelican welcomes back the intense, rich brew just in time for cold weather savoring. The Brewed Abides is available now in 12 oz. six-packs and on draft at Pelican brewpubs and other participating watering holes. 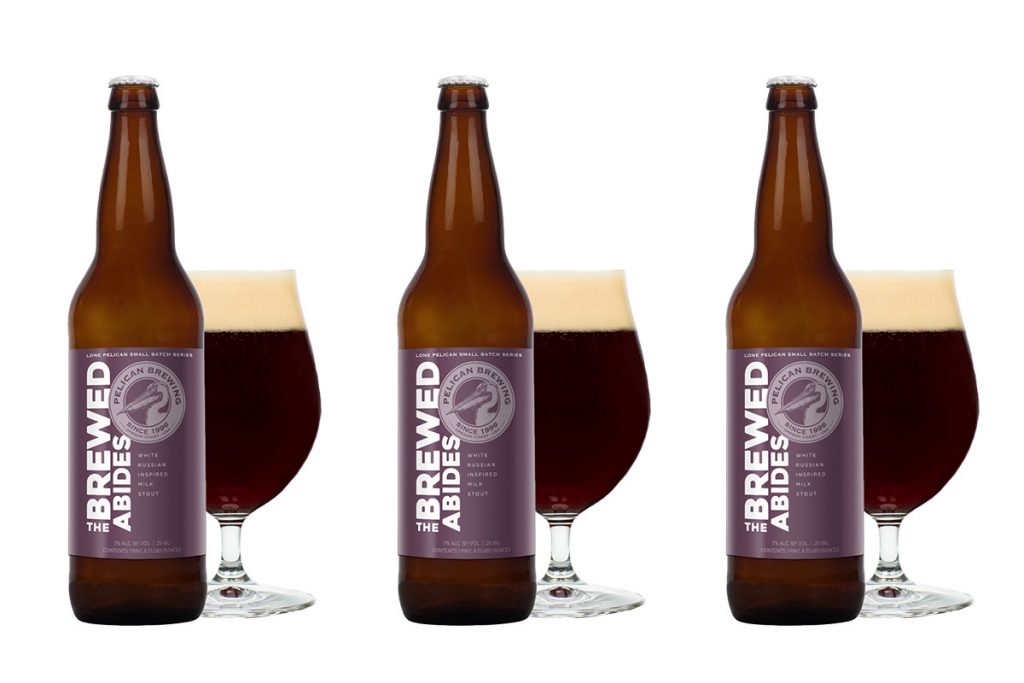 All brewers like a cocktail from time to time, but how about the best of both worlds in this cocktail-influenced beer? The Brewed Abides takes its inspiration from the classic ‘White Russian’ cocktail as well as ‘The Dude’ imbibing it in the movie that made it famous, The Big Lebowski.

The Brewed Abides is a milk stout brewed with fresh roasted coffee, cacao nibs and vanilla beans. This unconventional beer pours a chocolate color with dense off-white foam and entices the senses with an aromatic bouquet of coffee, dark chocolate and a subtle hint of vanilla.

“It took some finessing to get all of the flavors to abide but the end result is a delightful and smooth drinkable beer,” says Coren Tradd, Pelican brewer who created the recipe for The Brewed Abides. “What is so remarkable about Pelican beers is that we don’t take the path of least resistance—we take calculated risks exploring diverse and contrasting flavors. I cannot wait to taste the next release of this one.”

“The Brewed Abides was a sensation when it was released earlier in 2019—literally selling out in days—we are thrilled to bring it back to begin our seasonal rotation in 2020,” said Darron Welch, founding brewmaster at Pelican Brewing Company. “Our goal was to evoke the flavors of a White Russian while still remaining true to the beer in overall balance and drinkability—all while ensuring all of the flavors and ingredients worked in harmony. The brew team nailed it!”

Like all Pelican beers, The Brewed Abides is born at the beach by a team of award-winning craft beer makers known for brewing styles of beer that they themselves love to drink. Cheers!

About Pelican Brewing Company
Pelican Brewing Company was born at the beach in 1996. Here, in front of a rundown old building at the water’s edge, stood three enthusiastic young folks whose thirst for great beer overshadowed their understanding of what it would take to build a brewery. They did it anyway. Thanks to the vision of founding owners Jeff Schons and Mary Jones, Oregon’s only beachfront brewpub became one of the state’s most popular destinations. And now 24 years later, Pelican Brewing Company is an iconic beach brand and one of the most decorated craft breweries in Oregon. Pelican has been honored with more than 450 awards including the prestigious 2015, 2016, 2017 Australian International Beer Awards Champion Medium International Brewery; 2014 World Beer Cup Champion Small Brewery; 2013 Great American Beer Festival Large Brewpub of the Year. Why? Pelican brews are playful, but not frivolous. Brewed with purpose, passion and a deep respect for the craft. Pelican operates brewing and brewpub facilities in Pacific City, Cannon Beach, and its state-of-the-craft brewery in Tillamook, Oregon where it brews 40,000 barrels of award-winning beer annually and distributes to six states. Pelican’s vision, its beer and values were born at the beach where the team wakes up each day in a place that reminds them that amazing is possible. Cheers, Fellow Fanatics!