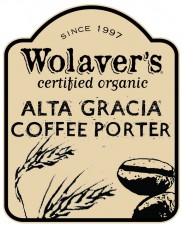 The brewers of Wolaver’s organic ales have crafted another new beer as part of their seasonal Organic Farmers series. Alta Gracia Coffee Porter is brewed with organic roasted barley and chocolate malts for a rich, dark and robust flavor with an infusion of organic vanilla beans, and coffee from the Dominican Republic farm community Alta Gracia.
This non-profit farm works to empower farmers with tools and techniques to grow quality shade-grown organic coffee. The result is growers who feel pride in their stewardship of the land, are paid fairly for their labor, and have healthy sustainable farms. The new brew follows Will Stevens’ pumpkin ale and is scheduled to hit shelves by November. Available in 6 packs, cases and draft. Visit wolavers.com and cafealtagracia.com for more info. 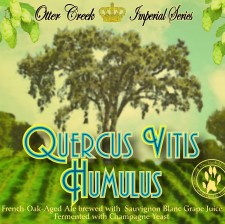 Otter Creek Brewing’s Imperial Series continues with a new brew releasing in October. Says Brewmaster Mike Gerhart: “Quercus Vitis Humulus is our brewers’ tribute to the mighty oak, luscious grape, and humble hop.” The homage begins with a bold 27 degree plato barley-wine, warm-fermented with Bohemian lager yeast, then blended with Sauvignon Blanc grape juice and fermented a second time with a pure culture of Champagne yeast. When this intricate brew was complete, they aged it on lightly toasted French Oak. The six week journey through the Middlebury brewery results in a deeply complex ale which clocks in at 12% ABV, with 38 IBU.
Available in 22 oz and draft.

Coming to stores in November will be the Otter’s Selection Gift pack- a tall black box containing three 22-oz bottles and a glass to drink them with. This year’s gift pack will feature all three Otter Creek Imperial ales: Russian Imperial Stout, Imperial India Pale Ale, and the new Q.V.H.. A very nice gift for any beer lover.

Otter Creek Brewing’s Oktoberfest Autumn Ale will be available August through October. This Autumn Ale is brewed with Hallertauer and Tettnang hops to balance a clean, malty sweetness. Pours the color of fall foliage in Vermont. The perfect brew for a crisp, autumn day.
Visit ottercreekbrewing.com for more information.
4.8% ABV

Otter Creek Winter Ale will be available this winter from November through January. The special release is a smooth brown ale, with a touch of raspberry. Rich and toasty with a warming body and light hops, this is a malty and perfectly fruited beer- very appealing and comforting. Just right for wintertime.
www.ottercreekbrewing.com
5.85% ABV

If you have a recipe with beer as an ingredient, now is your chance to cash in. Wolaver’s is running their Healthy Holidays Recipe Contest again this year, and one lucky winner will receive a $200 shopping spree at the grocery store of their choice. The contest will run throughout the holiday season, starting November 1.  For more info, visit wolavers.com

Otter Creek Brewing is giving you the chance to put a ski trip under your tree this year. The trip includes lodging and lift tickets, as well as a brewery tour. Anyone 21 years or older can enter to win at ottercreekbrewing.com starting Nov 1. The winner will be drawn on December 22nd, just in time for Christmas.

Full Sail Wants You To “Meet The Brewer And The Bier” Saint Arnold Brewing To Release Divine Reserve No. 8