(Brevard, NC) — Oskar Blues Brewery’s award-winning Imperial Stout, Ten FIDY, makes its return to shelves and watering holes just in time for cool autumn temps and offers an alternative to the conventional varietals. Ten FIDY (10.5% ABV) is massively flavorful brew that is unlike any seasonal you’ll find this fall. 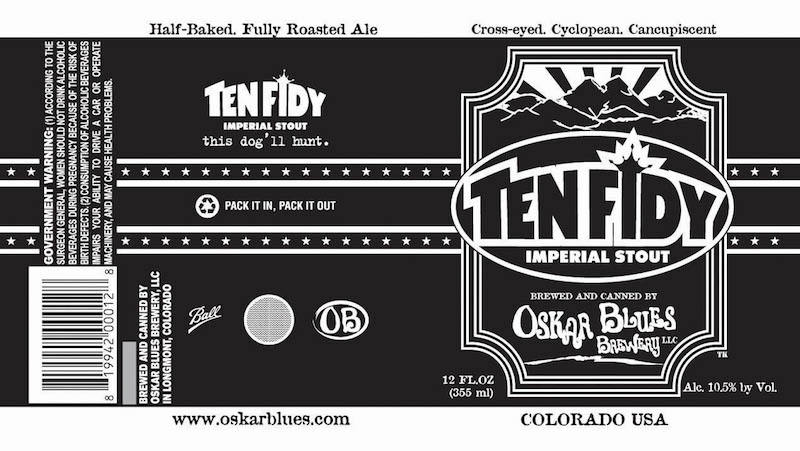 Ten FIDY is an immensely viscous stout loaded with inimitable flavors of chocolate-covered caramel and coffee underneath a smooth blanket of malt. This brew is constructed with colossal amounts of two-row malt, chocolate malt, roasted barley, flaked oats and hops. With 98 IBUs, you won’t forget you’re drinking a burly beer.

“The brewing process for Ten FIDY is as unique as the stout beer itself. We have to mash-in two batches just to get one kettle filled because we only take the most concentrated wort from each mash. It’s a labor intensive process, but this is part of how we make Ten FIDY so unique, rich, and complex,” says Oskar Blues NC Operations Manager, Noah Tuttle.

Ten FIDY is sold in 4-packs of 12-ounce CANS and is on shelves now in all 44 states where Oskar Blues is sold, as well as on draft at craft beer retailers, growler fill shops, restaurant, bars and more. Get it while you CAN, until it’s gone. It’s autumn, but that doesn’t mean you can’t go big, go bold, go FIDY.

LAUNCH EVENT – September 4: Join the team for a HUGE fuh-CAN release party at the Brevard brewery, featuring live music from the Strangled Darlings, food from the Oskar Blues CHUBwagon and Nintendo 64 on the big screen. Wear black for a free poster and get your FIDY flight with these amazing in-house only brews:

Coming from Asheville? Want a FREE ride? Snag a seat on the Party Trolley here.

About Oskar Blues Brewery
Founded by Dale Katechis in 1997 in Lyons, Colorado, Oskar Blues Brewery launched the craft beer-in-a-can apocalypse with hand-canned, flagship brew Dale’s Pale Ale. Today, Oskar Blues is one of the fastest growing independent breweries in the country and operates breweries in Longmont, Colorado and Brevard, North Carolina, producing more than 150,000 barrels in 2015. The original canned craft brewery currently distributes to 44 U.S. states, Washington, D.C., as well as parts of Canada, Sweden, and the U.K.

In 2013, Oskar Blues founded the CAN’d Aid Foundation, a 501(c)(3) nonprofit public charity that offers grassroots grants to those making a difference in the areas of community, the environment, music, and more. To keep up with all things Oskar Blues, visit www.oskarblues.com.