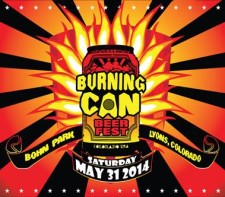 Lyons, CO – Outdoor enthusiasts, craft beer aficionados, adventure sports fans, and live music lovers descended on the open space in the unaffected areas of Bohn Park in Lyons, CO, for Oskar Blues Burning CAN Beer Festival and the Lyons Outdoor Games. It was a day filled with beautiful ColoRADo sunshine, great beer, and an overwhelming amount of support for a community still recovering from the devastating floods that washed through the state last September.

Fifty-two innovative and can-centric breweries from across the U.S. gathered to create the largest and most successful Burning CAN Beer Festival to-date, drawing an attendance of nearly 2,000 people under views of Rocky Mountain National Park. Oskar Blues Brewery announced on Wednesday morning that all proceeds from the festival tallied a grand total of over $45,000 for the CAN’d Aid Foundation, all of which will be distributed to local benefactors, the Colorado Brewers Guild, and the Town of Lyons Parks & Recreation Department-an organization still seeking resources to repair much of the damaged infrastructure of Lyons. 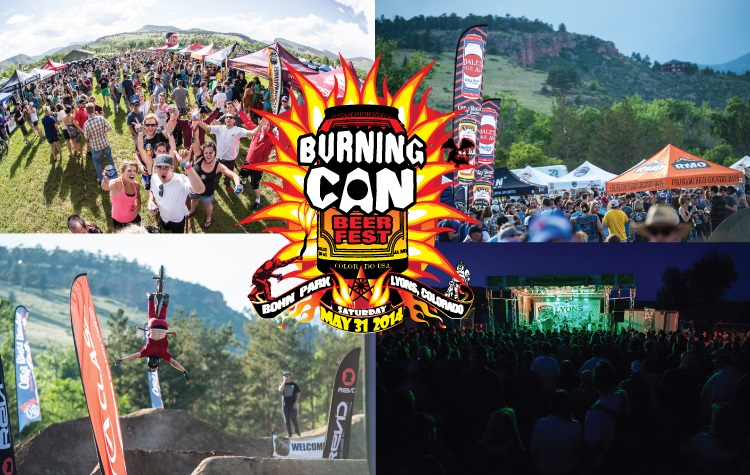 “There was an amazing vibe at the 2014 Burning Can & Lyons Outdoor Games. It was rad to see the town of Lyons, volunteers, supporting sponsors along with participating athletes and brewers come together to create something that tapped into the spirit of why we call Lyons home, while raising funds to keep that momentum rolling,” says Lyons resident & Oskar Blues marketing director Chad Melis.

In its 13th year, the Lyons Outdoor Games also drew crowds of people to Lyons for the pro kayaking events in the fast-moving St. Vrain River, the high-flying “Outlaws of Dirt” Jump Series, the Slackline Jam presented by Gibbon Slacklines, and a free concert featuring Interstate Stash Express and festival headliner, Anders Osborne. Osborne serenaded festival goers into the night with songs inspired by the singer-song writer’s own flood stories following Hurricane Katrina in his home of New Orleans.

As part of its national recycling initiative, the CAN’d Aid Foundation awarded the Town of Lyons a grassroots recycling grant just prior to Burning CAN. The grant included ZeroHero’s signature reusable recycling stations, volunteer training and education as well as on-site support. The unique recycling tents effectively corral all recyclable materials and were used to collect an estimated 700 pounds of aluminum alone at Burning CAN.

On July 5th, Oskar Blues Brewery will bring the Burning CAN Beer Festival east of the Mississippi for the first time with the inaugural Burning CAN Brevard taking place at Oskar Blues’ brewery in Brevard, North Carolina. The festival will kick off over the July 4th weekend with a free live show on Friday night at the brewery and bike rides & a river float along with beer tasting from 30 plus canning breweries from 1-6 p.m. and live music throughout the day on Saturday – www.burningcan.com

About Oskar Blues Brewery
Founded as a brewpub by Dale Katechis in 1997, Oskar Blues Brewery launched the craft beer-in-a-can apocalypse in 2002 using a tabletop machine that sealed one can at a time. In 2008, the makers of the top-selling pale ale in ColoRADo, Dale’s Pale Ale, moved into a 35,000-square-foot facility in Longmont, ColoRADo. The brewery has since experienced explosive growth–packaging 59,000 barrels of beer in 2011 and 86,750 barrels in 2012. In December of 2012, Oskar Blues opened the doors to an additional brewery in Brevard, North Carolina. Together, the breweries packaged 119,000 barrels of beer in 2013, and now distribute their trailblazing craft brews to 35 U.S. states and Washington, D.C.www.oskarblues.com – @oskarblues – @oskarblueswnc – facebook – facebook SE – youtube

About CAN’d Aid Foundation
The Oskar Blues CAN’d Aid Foundation was created following the massive flooding in Oskar Blues home towns of Lyons & Longmont, CO. Although the “CAN’d Aid Foundation” has begun developing national partnerships in a variety of areas the foundation’s immediate focus was on maximizing fundraising efforts for the expedited distribution of monies to areas that experienced massive devastation during severe flooding that struck the Front Range of Colorado. The foundation rallied with the support of the brewing industry, The Infamous String Dusters and OneRepublic to raise $515,000 reaching their 2013 goal of $500,000 as they approach $1M by Mid-Year 2014 for additional initiatives. The foundation quickly funded 55 small businesses, 236 individuals & families and 5 organizations for flood relief be the end of 2013.

ABOUT LYONS OUTDOOR GAMES
Originally known as the Lyons Whitewater Festival, the Lyons Outdoor Games was created 13-years ago as a fund-raising vehicle for the Lyons Department of Parks, Recreation & Cultural Events. In addition to a full complement of world class kayaking, biking, fly fishing, chainsaw carving and even dog events, the 2014 Games will feature live music along with numerous clinics and exhibitions put on by some of the world’s most elite professional athletes. www.lyonsoutdoorgames.com – facebook

ABOUT COLORADO BREWERS GUILD
CBG is a trade association dedicated to the Colorado craft brewing industry and facilitates educational beer activities in Colorado. The CBG sponsors a variety of beer events throughout the state each year designed to increase awareness and appreciation of Colorado brewed beer. For information about the Colorado Brewers Guild and its member breweries: www.coloradobeer.org.