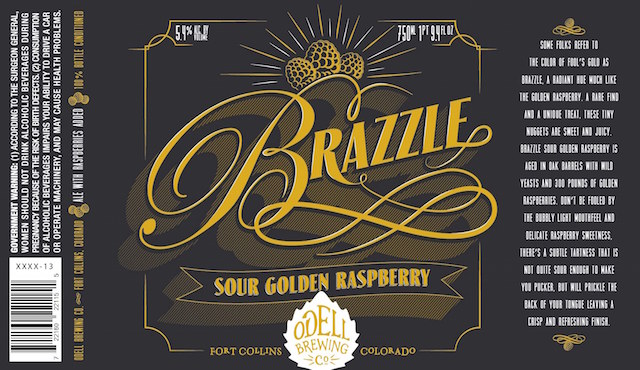 “We used golden raspberries to brew with, which gives this sour a touch of sweetness. There is also a bright, tart fruit and citrus flavor that comes through,” said Barrel Aging/Pilot System Manager, Brent Cordle. “The sour acidity plays well with the raspberry flavor. This is a very unique sour, and WELL worth the wait!”

The base beer in Brazzle is a crisp golden ale that was aged and soured in former Woodcut barrels for a little over two years. 300 pounds of raspberries were added before and after the barrel aging process, giving the beer both a puckering tartness and a hint of raspberry sweetness.

Brazzle is offered in 750 ml, cork and cage finished bottles, and will be available within the brewery’s eleven state distribution area this spring. Odell Brewing will celebrate the release of Brazzle in the Tap Room February 27th – March 1st. Guests can enjoy samples of the beer, and live music on Sunday afternoon. A special Welsh Rabbit cheese pairing plate will also be available for purchase (while supplies last). For more details on the beer and the Tap Room release party, please visit the brewery’s blog.

About Odell Brewing – Founded in 1989, Odell Brewing was started by Doug Odell, his wife Wynne, and his sister Corkie. Today, the culture of family and collaboration still thrives fostering a brewery full of beer-centric people. It is this passion for beer that inspires Odell Brewing to create quality, hand-crafted, innovative brews. As a regional craft brewery, Odell Brewing is committed to serving the communities in which it distributes by minimizing its environmental impact, sourcing local raw materials, and through its charitable giving program known as Odell Outreach. Odell Brewing was named a “Best Company to Work For” in 2013 by ColoradoBiz Magazine and is an award winning brewery, nationally and internationally: 2014 World Beer Cup® – gold for Runoff, 2013 Great American Beer Festival® – gold medal for 5 Barrel Pale Ale, 2012 Brewers Association Recognition Award, 2011 Great American Beer Festival® – gold medal for Friek, 2008 World Beer Cup® – gold for IPA. 2007 Great American Beer Festival® – gold medal for IPA.