(EUGENE, OR) – The Oakshire team is excited to announce the taproom-only release of Rainbow Sherbet Smoothie IPA in 16-ounce 4-Pack Cans. Prior to this release, Rainbow Sherbet had only been available in draft format during the winter months of late 2018 and early 2019. Oakshire operates two taprooms in Oregon where 60 total cases of this new rendition may be purchased after the 6pm release on Tuesday, September 3rd: in Eugene, at 207 Madison St. and in Portland, at 5013 NE 42nd Ave. 4-Packs of the 6.7% ABV experimental offering are available for $20 each and at a one case per customer limit. 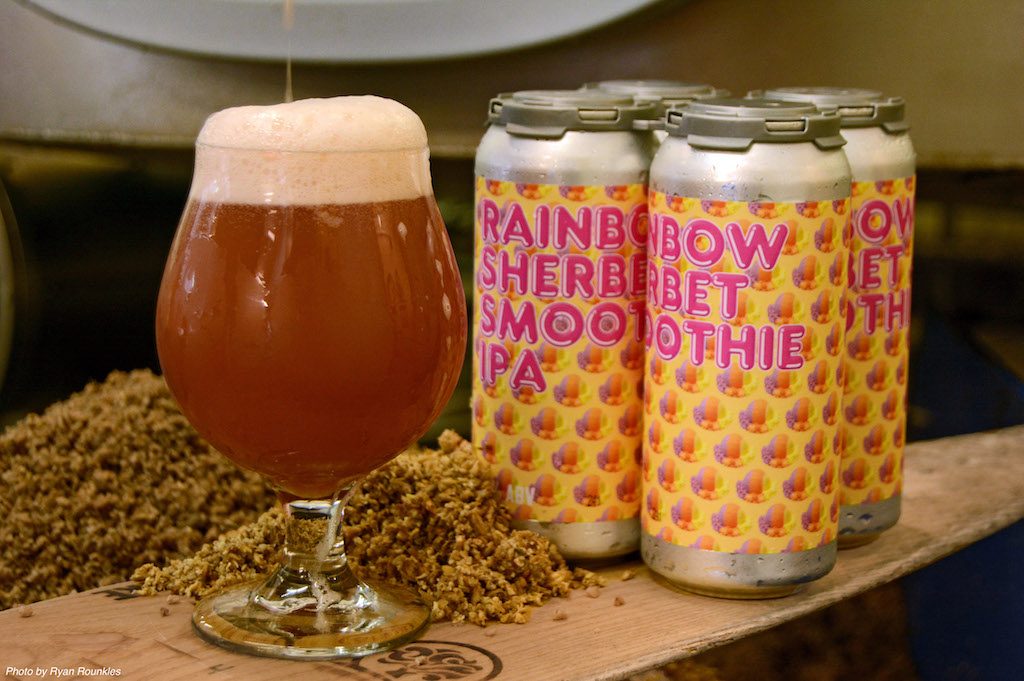 The packaging is as bold and nostalgic as the beer, with a call back to its ice cream truck namesake. The bright pink and orange label was designed by Tony Figoili of Eugene-local Figoli Quinn and Associates, and it superbly compliments this wholly unique beer. Beyond the two locations, Rainbow Sherbet will be available in draft format at a limited amount of taprooms around Oregon. “The brewing staff is beyond excited for the re-release of Rainbow Sherbet and to introduce it in canned format for the first time,” stated Oakshire’s Director of Brewing Operations Dan Russo. “I thought there was no way to make the beer any more sherbet-like than last year. I am happy to report how wrong I was!”

Continually experimenting with inventive styles, the Rainbow Sherbet Smoothie IPA exists as one of Oakshire’s most ambitious Pilot beer projects. Originally conceptualized during GABF in 2018, the aim was to recreate the flavors of the iconic and delicious cold treat in beer form. To achieve this goal, the beer started with a base of pillowy malted oats, before receiving a heavy hand of El Dorado hop oil and Mosaic hops in the whirlpool. It was then fermented with Oakshire’s favorite hazy yeast strain. Rainbow Sherbet IPA was lovingly triple dry-hopped with a combination of Citra, Mosaic, Denali, and the all- hailed Galaxy to impart huge notes of pineapple, mango, and lychee, matched with a pleasant bitterness. A combination of pineapple, tangerine, and raspberry fruit puree, with a touch of blackberry and blood orange puree from local purveyor Oregon Fruit Products, adds a layer of sweet depth. Singing Dog’s Madagascar vanilla beans balance the fruit with layers of creaminess to complete the treat- turned-beer.

About Oakshire Brewing: Oakshire Brewing of Eugene, Oregon, is a community inspired small batch brewing company founded in 2006. Oakshire is privately owned by the family and friends of its founders, employs 28 people, and produces a wide variety of beers through its three distinct brewing programs: Core, Pilot, and Vintage. These beers are available on draft and in package through Oakshire’s exceptional wholesale partners in Oregon, Washington, Idaho and Colorado. Oakshire operates two taprooms in Oregon, the Oakshire Public House in Eugene is located at 207 Madison Street, and the Oakshire Beer Hall in NE Portland, which is located at 5013 NE 42nd Ave. Both locations are open 11am to 10pm daily. The brewery is closed to the public except for tours and tastings each Friday from 5-8pm between Memorial Day and Labor Day. For more information about Oakshire, including our people, locations and beers, visit our website at oakbrew.com.