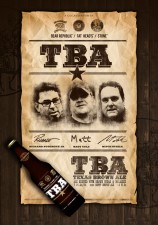 Escondido, CA – Stone Brewing Co. is releasing its first collaboration beer of 2012—dubbed “Bear Republic ⁄ Fat Head’s ⁄ Stone TBA”- which begins rolling out to select regions today.
This particular beer pays homage to a relatively little–known beer style called Texas Brown Ale, which, strangely enough, has its roots in California. It originated as a hopped up version of a brown ale recipe, and it got pretty popular with a group of NorCal homebrewers in the early 1980s.

“These California guys were tweaking an English-style brown,” explains Matt Cole, Head Brewer of Fat Head’s Brewery. “They added some Crystal and Chocolate malts, and supercharged it with a bunch of Cascade hops to get a bigger version with more hop forward aromas and flavors.”

While delicious, these beers failed to fare well in homebrew competitions, since there was no recognized category they could be entered in. They were far too hoppy and bitter to be considered a traditional brown ale. But when a competition in Houston, TX, accepted entries for what they named the “California Dark” category, the American Homebrewers Association followed suit soon after, though they perplexingly changed the name to Texas Brown Ale. 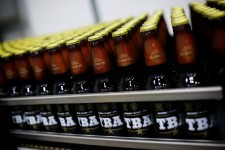 “Bear Republic ⁄ Fat Head’s ⁄ Stone TBA” revisits this uncommon style, incorporating a few new twists. “Everyone got to add elements that they feel are special to them for that style of beer,” notes Richard Norgrove, Jr., Brewmaster at Bear Republic Brewing Co., who added brown sugar and molasses to the recipe for added complexity. “That’s what’s cool about collaborations. You get to work with two other brewers you respect, and you all have different thoughts and ideas on how to make a great beer together.”

“Collaborations give us a chance to get really creative,” adds Mitch Steele, Brewmaster at Stone Brewing Co. “We get to make a beer that we otherwise wouldn’t normally brew.” 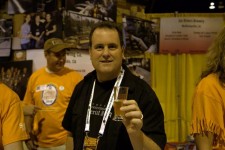 Aroma: The first hit is a piney, herbal hop note followed by fruity fermentation esters. Beyond that, there is a complex molasses undercurrent.

Taste: The taste starts off with a higher balance of malt flavors, with biscuity, dry roasted and wheat-like characters combining nicely with the herbal hop component. Mid-palate is some more fruit, molasses and brown sugar, and the finish is a bitter, intensely grapefruity hop linger.

Palate: This beer has a medium body, finishes light with a nice lingering bitterness.

Overall: A throwback to the early days of craft brewing with some interesting twists along the way. It has that classic Brewers Gold/Cascade hop presence, with combinations of herbs, pine and citrus. 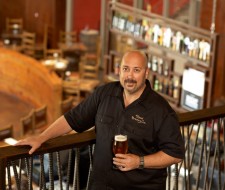 ABOUT STONE BREWING CO.
Stone Brewing Co. was founded in 1996 by Steve Wagner and Greg Koch in North County San Diego, CA. It is the 14th largest craft brewery in the United States and has been named “All-Time Top Brewery on Planet Earth” by BeerAdvocate magazine – TWICE! A recently announced $26.6M expansion plan (that includes a hotel among other lofty ventures) is underway, as are developments to become the first American craft brewery to open a brewhouse in Europe. Visit stonebrew.com for more information