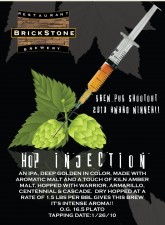 BrickStone’s BrewMasters have done it again! They have brewed you a special IPA available for a limited time … Hop Injection!

It’s an IPA, deep golden in color, made with aromatic malt and a touch of kiln amber malt. It’s hopped with warrior, amarillo, centennial and cascade and is dry hopped at a rate of 1.5 lbs per bbl giving this brew an intense aroma. O.G. 16.5 Plato.

This is the same brew that BrickStone showcased at the Chicago Beer Society’s Brew Pub Shootout on Saturday with Filet Mini Sliders, placing third in the food & beer pairing (by popular vote).