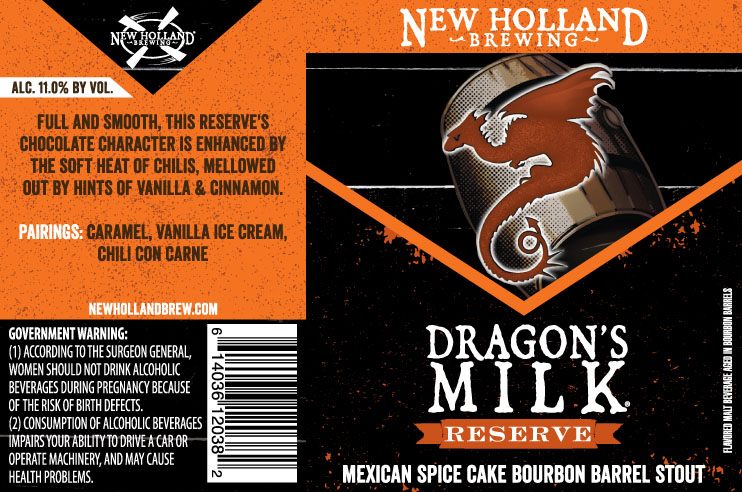 “We first brewed this variation for Michigan Brewers’ Guild Winter Beer Fest (WBF) in February of 2016,” says Brett VanderKamp, president of New Holland. “And it’s been a fan favorite ever since. People couldn’t get enough at that beer fest, at the handful of small events across the country in which we tested it, and again at this year’s WBF. It was time for this variant to own the spotlight.”

New Holland’s locations, Pub on 8th in Holland and The Knickerbocker in Grand Rapids, will host official release parties for Dragon’s Milk Reserve Mexican Spice on Saturday, April 1. The beer will be on tap, available in special Dragon’s Milk flights, and available for purchase by the 4pack and case in the retail spaces. Doors open at 11am and the first 20 people in line will get a Dragon’s Milk swag bag.

“This variant is so simple,” says VP of Beer Marketing, Joel Petersen. “The chocolate character in Dragon’s Milk is enhanced by the soft chili heat and mellowed out by the flavors of vanilla and cinnamon. It’s simply delicious and continues to show how well Dragon’s Milk can play with new flavors.”

The third Dragon’s Milk Reserve variant is scheduled to release in July.

All Dragon’s Milk reserves will be released in limited quantities across the areas in which New Holland distributes. To find Dragon’s Milk Reserve Mexican Spice Cake in your area, use our Beer & Spirits Finder or ask your local retailer.

First released in 2001, Dragon’s Milk was one of the early bourbon barrel-aged stouts in the US. The barrel-aging scene has since exploded. Once a single-batch annual release, Dragon’s Milk has become New Holland’s largest selling year-round beer, gaining accolades and recognition internationally, including a silver medal in the Brussels Beer Challenge. In 2015, New Holland renovated its production facility to expand its Dragon’s Milk cellar where more than 3,500 oak barrels can reside at one time.

About New Holland Brewing Co.
New Holland Brewing’s deep roots in the craft industry go back to 1997. They believe the art of craft lives in fostering rich experiences for their customers, through creating authentic beer, spirits and food while providing great service. Recognized for their creativity and artistry, New Holland’s mission to improve the lives of craft consumers everywhere is seen in their diverse, balanced collection of beer and spirits and their two West Michigan brewpubs.