The three breweries will be releasing a collaborative brew they worked on together prior to American Craft Beer Week – an English Pub Ale called Our New Lake. The breweries will have a Shotgun Release Party on May 12 to share that brew with their customers. New Holland will tap at 3:00pm, Our Brewing at 5:00pm and Big Lake at 7:00pm. All three breweries are encouraging their fans to patron the other establishments. 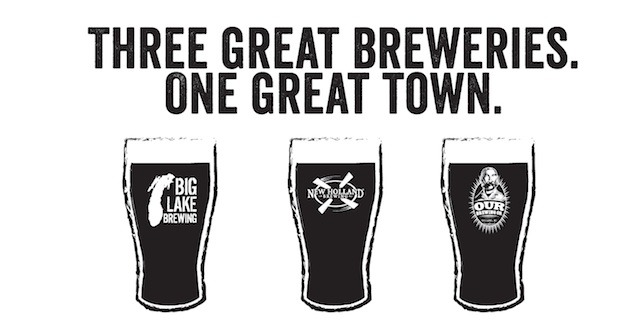 “I’ve been in the brewing business for 18 years,” says New Holland Head Pub Brewer, Steve “Bert” Berthel. “The one thing that has remained true since the day I started is the collaborative and inquisitive spirit of those in the industry. This isn’t a competition. This is a lifestyle.”

“American Craft Beer Week is a great time for us to get together with our fellow brewers and share what we love with the beer community,” says Our Brewing Company co-owner Trevor Doublestein.

Big Lake Brewing co-owner, Nic Winsemius adds “Brewing together reminds us all why we got into this business – to create, to collaborate and to sit back with one another to share our stories over great beer.”

The three breweries will also reward their customers by giving out passports to all of their guests. If fans stop by all three breweries during the week and get their passport stamped, they will be entered into a raffle with prizes from the breweries.

“This year’s tag from American Craft Beer Week is ‘Brewnited We Stand’,” says Berthel. “That’s a statement worth celebrating and I’m glad our three breweries got a chance to really put it into practice.”

For more on American Craft Beer Week celebrations across the state and country visit HERE.
***

About New Holland Brewing Co.
New Holland Brewing Company’s deep roots in the craft industry go back to 1997. Our role as an integral member of the artisan approach is something we take seriously, yet engage lightheartedly. We believe the art of craft lives in fostering rich experiences for our customers, through creating authentic beer, spirits and food while providing great service. Recognized for our creativity and artistry, our mission to improve the lives of craft consumers everywhere is seen in our diverse, balanced collection of beer and spirits.

About Big Lake Brewing
Located on Holland’s north side, Big Lake Brewing (BLB) opened in the summer of 2013 with the call to action to “Buy Local Beer”. Owned and operated by Greg Mackeller, Travis Prueter, and Nic Winsemius, the brewery excels in producing classic styles of beer and fruit-infused wines. BLB is located at 977 Butternut Dr. #4. Find them on Facebook at “Big Lake Brewing” or visit www.blbrewing.com for a current tap list.