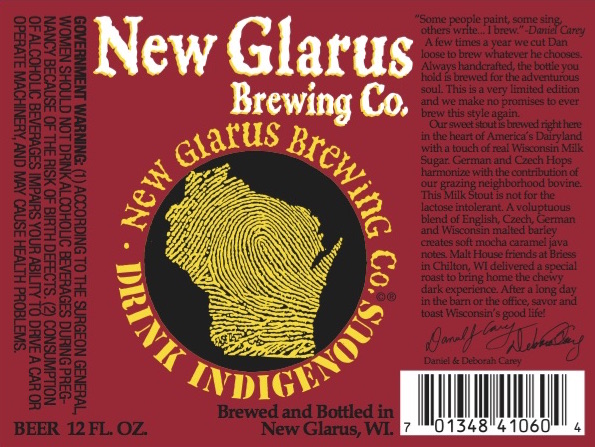 Diploma Master Brewer Daniel Carey used German and Czech Hops that harmonize with the contribution of the neighborhood bovine. Using a voluptuous blend of English, Czech, German and Wisconsin malted barley, he created a brew with soft caramel java notes. Malt House friends at Briess in Chilton WI, delivered a special roast to bring home the chewy dark experience. This Milk Stout is not for the lactose intolerant.

New Glarus Brewing Company Founder and President Deborah Carey noted that “After a long day in the barn or in the office it’s time to savor and toast Wisconsin’s good life.” Her thumbprint is on the bottle just to remind everyone that this is a real New Glarus Handcrafted beer.

The New Glarus Brewing Company was formed in 1993 by Daniel and Deborah Carey, who combined their considerable talents of brewing great beer and business management skills to build a an state of the art award winning brewery that still honors the history and traditions of the Village of New Glarus. In 2015 New Glarus Brewing Company became employee owned. Dan and Deb Carey along with the entire brewery team have worked hard to maintain their philosophy based on individuality, cooperation and the employment of 100% natural ingredients to produce world-class handcrafted beers for our friends…. Only in Wisconsin!