(New Glarus,WI) – There are wonderful things happening at the brewery! Moon Man will be available in cans sometime this summer; there will be three R&D releases and some other surprises that we will announce later. Included in the “wonderful things” is the release of Cran-bic 2016; a delicious sparkling and bright brew! 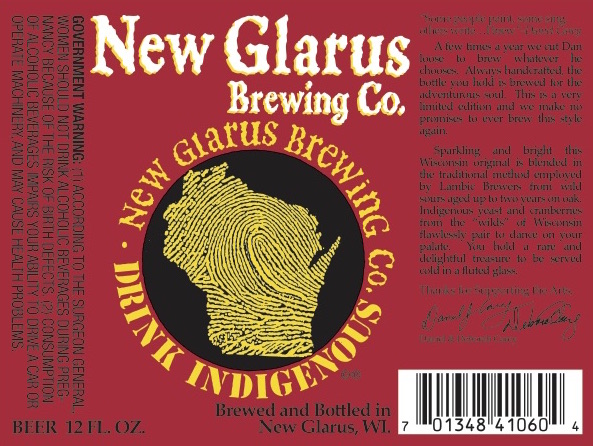 Cran-bic 2016 is a Wild Sour Wisconsin original created in the traditional method employed by the Lambic Brewers of Belgium, aging up to two years on oak. Diploma Master Brewer Daniel Carey uses indigenous yeast and cranberries from the “wilds” of Wisconsin that flawlessly pair to dance on your palette.

Cran-Bic is one of New Glarus Brewing Company’s Thumbprint beers. Thumbprint beers are brewed with the beer enthusiast in mind. They are brewed in small batches that are intended to be available for one time only. However, popular demand has caused some styles to return.

Brewery hours are from 10 a.m. to 5 p.m. Monday through Saturday, and Noon to 5 p.m. on Sundays. The brewery offers free self-guided tours.

Now Employee Owned, New Glarus Brewing Company
was created in 1993 by Daniel and Deborah Carey, who combined their considerable talents of brewing great beer and business management skills to build a state of the art award winning brewery that still honors the history and traditions of the Village of New Glarus. Dan and Deb Carey have worked hard to maintain their philosophy based on individuality, cooperation and the employment of 100% natural ingredients to produce world-class handcrafted beers for our friends Only in Wisconsin.