(New Glarus,WI) – Autumn in Wisconsin is amazing! The fall colors are beautiful, and the cool evenings are perfect to sit around a fire and enjoy the company of friends and family. In the spirit of the season, New Glarus Brewing Company has released four beers that celebrate the season! 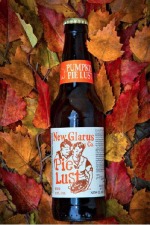 New Glarus Brewing Company’s newest brew, Pumpkin Pie Lust is perfect to enjoy with a holiday dinner. This rich brown Weiss beer pours an elegant spicy nose with a thick creamy head. This Pumpkin Weiss is sure to satisfy your soul’s Pie Lust.

New Glarus Brewing Company Founder/President Deb Carey noted, “It is a fact that Dan, our New Glarus Master Brewer, loves pumpkin pie. So it was inevitable that one day beer and pie would collide. No holiday is complete at our home without home baked pumpkin pie.” Just as Dan once baked this pie for Deb, he now creates this brew for everyone.

Political debate rages over the origins of Black IPA as both coasts feel they deserve credit for the style. Our Black Top is a pleasant road connecting Villages and Communities statewide on a ride of Black IPA discovery. Diploma Master Brewer Daniel Carey was intrigued by the debate regarding the Black IPA style, and searched the world over for the perfect hop varieties. He put his stamp on Black Top’s style with a rush of soaring citrus and pine notes woven cleanly with black chocolate and molasses malt notes. With Black Top, Dan delivers a refreshingly drinkable 40 IBU Black IPA.

through armies of corn and bovine mowed fields. Enjoy the journey on a road less traveled.

The story behind the name “Fat Squirrel” is that one deceptively spring-like winter day, Diploma Master Brewer Daniel Carey walked home from the brewery, sat down to dinner and said, “Boy, there are some fat squirrels out there. They’re running all over the place. I think I should brew a Fat Squirrel Nut Brown Ale.” Founder/President Deb Carey agreed and soon another beer legend was born.

Diploma Master Brewer Daniel Carey developed Fat Squirrel, using a blend of six different varieties of 100% Wisconsin malt, which imparts a natural toasted color to the brew. Fat Squirrel is bottle conditioned and unfiltered. The careful blend of these malts imparts a clean hazelnut flavor to the ale. The hops in Fat Squirrel come from Slovenia, Bavaria and the Pacific Northwest.

Deb Carey advises, “When the going gets tough, remember to relax a moment and enjoy the “Fat Squirrel” in your neighborhood.”

Cran-Bic is one of New Glarus Brewing Company’s Thumbprint beers. Thumbprint beers are brewed with the beer enthusiast in mind. They are brewed in small batches that are intended to be available for one time only. However, popular demand has caused some styles to return.

Cran-bic is sparkling and bright! This is a Wisconsin original created in the traditional method employed by the Lambic Brewers of Belgium, including five months of outdoor resting in oak barrels. . Diploma Master Brewer Daniel Carey uses indigenous yeast and cranberries from the “wilds” of Wisconsin flawlessly pair to dance on your palette.

Deb Carey calls Cran-bic, “A rare and delightful treasure to be served cold in a fluted glass.”

The New Glarus Brewing Company was formed in 1993 by Daniel and Deborah Carey, who combined their considerable talents of brewing great beer and business management skills to build a an state of the art award winning brewery that still honors the history and traditions of the Village of New Glarus. Dan and Deb Carey have worked hard to maintain their philosophy based on individuality, cooperation and the employment of 100% natural ingredients to produce world-class handcrafted beers for our friends in Wisconsin. Cheers!