(New Glarus, WI) – When Master Brewer Daniel Carey was a young apprentice in Bavaria, Reinheitsgebot Lager was the bier that he brewed. Zwickel Bier is Dan’s confident response to the question, “What’s your favorite beer?”. 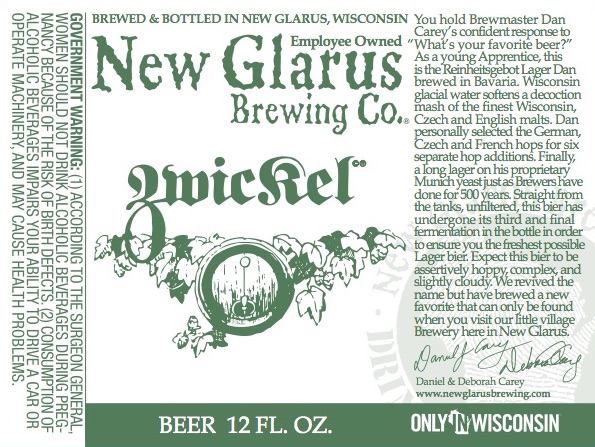 Zwickel Bier is the Wisconsin version of this lager. Although this bier shares the name of a beer produced by New Glarus Brewing Company a few years ago, this one is new and different, and only available at the New Glarus Brewery Hilltop facility. Zwickel Bier is assertively hoppy, and complex.

The glacial water of Wisconsin softens a decoction mash of the finest Czech and English malts. Dan travelled around the world to personally select the German, Czech, and French hops that he used in six separate hop additions. Finally Zwickel Bier had a long lager on Dan’s proprietary Munich yeast just as brewers have done for 500 years. Zwickel Bier, straight from the tanks, has undergone its third and final fermentation in the bottle in order to ensure that you getting the freshest possible Lager bier.

Brewery hours are from 10 a.m. to 5 p.m. Monday through Saturday, and Noon to 5 p.m. on Sundays. Sales of Zwickel are limited to two cases per person per day.

The New Glarus Brewing Company was formed in 1993 by Daniel and Deborah Carey, who combined their considerable talents of brewing great beer and business management skills to build a state of the art award winning brewery that still honors the history and traditions of the Village of New Glarus. Dan and Deb Carey have worked hard to maintain their philosophy based on individuality, cooperation and the employment of 100% natural ingredients to produce world-class handcrafted beers for our friends in Wisconsin. In 2015 New Glarus Brewing Company became Employee Owned!