(Honolulu, HI) – Having just opened a new production facility and pub in the heart of Kaka’ako, Waikiki Brewing Company will be adding two new cans to their lineup, and are proud to announce having partnered with Johnson Brothers of Hawaii, Inc. for statewide distribution. 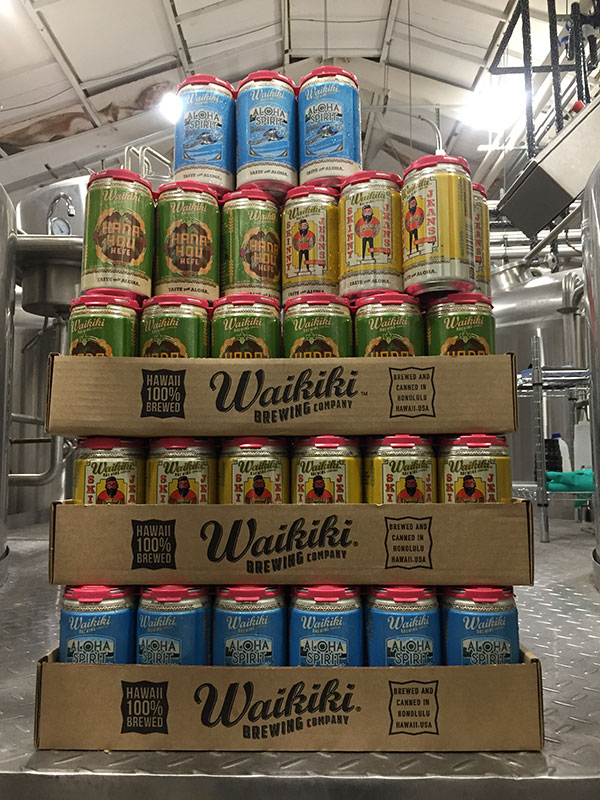 Canning operations began just over a year ago for Waikiki Brewing with their refreshing Hana Hou Hefe. Joining the lineup will be Aloha Spirit Blonde and Skinny Jeans IPA. “These two beers round out the selection of our most popular beers in our pubs,” says Brewmaster Joe Lorenzen. “The blonde is crisp and easy drinking – a great lawnmower beer, while Skinny Jeans is a nice crushable west coast style IPA. Light bodied, but with huge hop aroma and flavor that always leaves the hop-heads satisfied.”

In order to bring these beers to outlets throughout the state, Waikiki Brewing has partnered with Johnson Brothers of Hawaii, Inc. “We couldn’t be happier to partner with Waikiki Brewing Company to provide statewide distribution to the Hawaiian Islands,” said Miles Jones, the Hawaii State Retail Sales Manager for Johnson Brothers. “We are excited to have the opportunity to bring these high quality, 100% locally crafted beers to beer drinkers across the state.”

Waikiki’s first every brewery, Waikiki Brewing Company, brews premium quality, fresh, handmade craft beer in our 7 barrel brewhouse situated at the gateway of Waikiki. In addition to our core lineup of 8 beers, ranging from a light crisp blonde to a robust porter, we also indulge the brewers’ creativity with seasonal and limited release beers.

Waikiki Brewing Company opened its first location in Waikiki in 2015. The seven barrel brewhouse is capable of producing 1600 barrels a year and was at capacity almost immediately, leading the brewery to start looking for a second location. They found the ideal spot in Honolulu’s historic brewing district in up and coming Kaka’ako. The brand new 20 barrel brewhouse and high ceilings will allow production in Kaka’ako to top 9000 barrels annually, making Waikiki Brewing Company Oahu’s largest producer of craft beer.