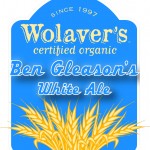 Ben Gleason has been growing organic wheat for twenty eight years at his farm in Bridport, Vermont, just ten miles from the Middlebury brewery.
The brewers at Wolaver’s have combined Ben’s organic raw wheat, organic rolled oats, and organic 2-row malted barley. The resulting golden brew is then mildly spiced with organic coriander and orange peel and fermented with an authentic Belgian yeast to create this complex and refreshing white ale. A fitting salute to Ben Gleason.
Available in 6 pks, cases, and draft. (4.6% ABV)
For more info, visit wolavers.com. 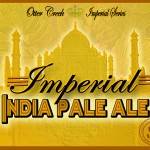 Otter Creek Brewing released the second offering in their new Imperial series May 1. An Imperial India Pale Ale joins the Russian Imperial Stout in 22 oz bottles and on draft. Brewed with more malts and more hops, these big beers are high-end and high-octane. Brewmaster Mike Gerhart and crew created a new level of hoppiness in this Imperial IPA using Amarillo, Apollo, Simcoe, and Bravo hops. Gary Spedding of Brewing and Distilling Analytical Services was shocked to get a result of 135 IBUs- which he had previously thought impossible. Fruity and citrus flavors and heady hop aromas balance an assertive malty backbone and an alcohol content of 11%.
For more info, visit ottercreekbrewing.com 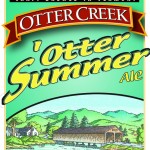 Otter Creek Brewing’s seasonal ‘Otter Summer ale is available now.
This Summer Ale is a highly drinkable, light bodied ale. It is made with a large proportion of malted wheat, in addition to malted barley. The use of wheat and careful hopping produce a beer with a flavor that is slightly tart, with a citrus-like finish. Often served with a slice of fresh lemon, it is a pleasant thirst-quenching brew.
Available in 6 pks, 12 pks and draft. (4.8% ABV) 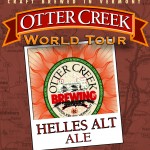 The Otter continues his World Tour in Vermont to revisit some of our “old favorites.” Helles Alt was an Otter Creek offering brewed back in the 1990’s and then discontinued to make way for new beers.
This beer is a combination of two brews originating in Germany. Helles means “bright” and refers to lager. Alt means “old” and refers to the old style of brewing using top-fermenting yeast at warmer temperatures. The combination produces a bright golden, refreshing ale that is well balanced with traditional German bittering and aroma hops. Just in time for barbecue season, this ale is the perfect complement to grilled foods and salads. Available in 22 oz bottles, draft, and in specially marked Vermont Sampler 12 packs.
Enjoy this limited brew while it’s here and give us your ideas on what the next brew should be. Visit ottercreekbrewing.com and click on Vote for the Next Beer.

A Release Party is scheduled for Friday, May 22, from 4-7pm at the brewery.

This summer Otter Creek Brewing is giving away a Vermont vacation. The brewery has partnered with local Basin Harbor Club, a beautiful and historic resort on Lake Champlain, to give away a dreamy getaway for two. The vacation includes daily meals, unlimited tennis and bikes, a round of golf, and a cruise on Lake Champlain! Anyone 21 or older can enter to win at ottercreekbrewing.com .
Otter Creek Brewing hosts weekly “Firkin Fridays” along with Local Cheese and Beer Pairings
Otter Creek Brewing is hosting a new weekly offering for the surrounding community and visitors alike. “Firkin Fridays” will feature a new cask of an Otter Creek or Wolaver’s organic ale. If you have never had the opportunity to enjoy cask conditioned ales, or if you love them, make a point to stop by for these special presentations, available only at the brewery. A cask will be tapped each Friday at 2pm and free samples will be poured on request.
The brewery has featured weekly local cheese and beer pairings for the past few years and plans to continue the tradition this summer and fall. Every Friday afternoon, from 4-6, visitors can stop by the brewery’s tasting room to sample a Vermont made cheese paired with one of the brewery’s many delicious brews. Coordinate your visit so you can enjoy a free tour, given Tuesday through Saturday, at 1, 3, and 5 pm.
For more info, visit ottercreekbrewing.com .