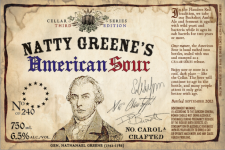 Greensboro, N.C. – September 21, 2012 – Natty Greene’s Brewing Co. has released their much anticipated Cellar Series American Sour Ale this week. With only 240 bottles of this oak aged Flanders Red Ale produced, this beer is expected to disappear fast from the few independent beer stores in which it will be available across the state. Dispersion is already underway and all bottles are expected to be delivered within the next two weeks.

The Cellar Series is a limited collection of unique beers that are crafted with carefully selected hops and malts. These brews are hand racked, numbered and sealed with wax. Past varieties have included an Imperial Stout and Belgian Dubbel, which were widely admired. Natty Greene’s launched its sour program in 2004 at their brewpub in downtown Greensboro, but as it grew in popularity, they began buying more barrels and eventually moved it into their production brewing facility a few miles away.

The American Sour Ale begins its journey after completing primary fermentation as the flagship Buckshot Amber Ale. It is then inoculated with several bacteria including Lactobacillus, and Pediococcus, as well as a couple of varieties of Brettanomyces yeast to produce the desired sour characteristics. Head brewer Scott Christoffel explains that each barrel of beer develops at a different speed, requiring the artistic challenge of blending the beer once it is ready to be bottled. Christoffel says that, “to come up with the desirable sweet/tart blend that we are looking for in the beer, you have to watch the pH to make sure that the beer is not too attenuated, because if the beer is too sour, it becomes so intense that there is not enough malt to balance it, or sweetness to balance it.” The public are not the only ones excited about this beer release, as owner Kayne Fisher states, “Of all the great beers we make, this is the one I look most forward to. It takes two years to make. Lots of love and expertise go into this beer.” Be sure to call ahead to your local beer store to ensure that the beer has arrived and is still in stock.

About Natty Greene’s: Launched in 2004 by Chris Lester and Kayne Fisher, Natty Greene’s has expanded from a brewpub in downtown Greensboro, to include a second location in Raleigh, and a production facility in Greensboro which provides beer for the entire state. As one of the fastest growing craft breweries in North Carolina, the beer can easily be found at all major grocery stores, many independents and on 700 taps across the state of North Carolina. The core beers are the Buckshot Amber Ale, Southern Pale Ale, and the Guilford Golden Ale. The brewery has more than 70 recipes in their repertoire, tantalizing the beer geeks with offerings like their extremely limited Cellar Series and their popular seasonals such as the upcoming Red Nose Winter Warmer Ale.
Follow Natty Greene’s On Twitter