(Flagstaff,AZ) – Come in and get your bottle of Third Anniversary Ale. This release is limited to 750 22 ounce bomber bottles that are hand signed and numbered by Michael Marquess, Founder, and Urs Riner, Brewer. The beer will be on draft with 10 ounce glasses for $5 and growler fills for $25. The bombers go for $20 each, or you can get a case of 12 for $200.

Each year on the anniversary of opening their doors, Mother Road brews an anniversary ale. A small portion of the previous year’s anniversary ale is poured into the new batch. The recipe changes each year, and this year’s ale is an Imperial Stout with loads of dark malt notes, roast, and espresso. 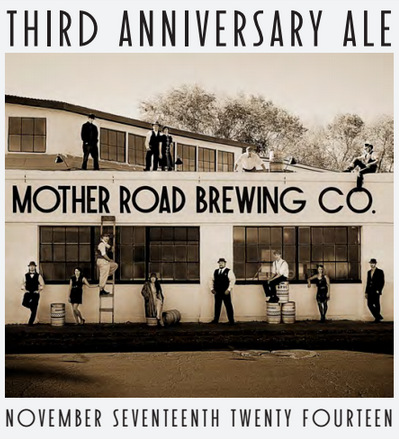 Adam has prepared a special cask offering of the Anniversary Ale. We will tap it at 5pm and sell Imperial Pints for $3.50.

We will also say goodbye to our trusty volunteer, Greg. He is leaving us to study the art of brewing at UC Davis in January. Come try his Broken Heel IPA and wish him well with his studies!