(ATLANTA, GA) – Atlanta-based Monday Night Brewing is turning eight years old the only way they know how — with a huge, two-day party on August 3-4. 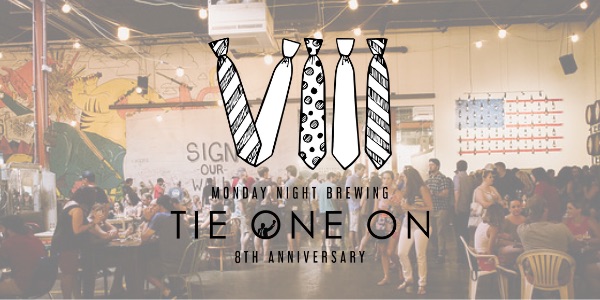 “Coming from homebrewing in a garage all those years ago to where we are today, it’s just been an amazing ride,” said co-founder Jonathan Baker. “Every year, we want to celebrate our anniversary with all our friends, fans and family, and every year it gets bigger.”

This year’s event promises to be one of the best beer bashes of 2019. Attendees can expect:

BBQ stations from around the world, including Korean BBQ, South American barbacoa, and classic Texan presented by DAS BBQ. A specially-created cask beer will accompany each station, and vegan options will be available.

Each year, Monday Night creates a special anniversary beer, and this year is no different. Tie 8 On is a big (13.4% ABV) blended strong ale with vanilla. Brewmaster Peter Kiley and barrel program director Tim McDonnell carefully selected eight different barrel aged beers to create this one. It will be available on draft during the party, with bottles to-go as well.

While Saturday’s event is for those 21+, Monday Night wanted to extend the party to families and dog lovers too. On Sunday, expect kid’s activities including face painting, bubbles (by the Georgia Bubbleman), chalk drawing, and sand castle building. For our four-legged buddies, Taj MaHound will have special treats and Atlanta Rescue Dog Cafe will have a leash-making station.

For superfans and beer nerds, a few tickets remain for the VIP experience, which includes two bottles of Tie 8 On, a special glass, a limited edition poster and bottle tote, and an exclusive behind-the-scenes brewmaster tour.

Early bird tickets are on sale through July 19. For more information, head to monday.pm/too8.

Based in Atlanta, Georgia, Monday Night Brewing grew out of a Bible study. Founded by Jonathan Baker, Joel Iverson and Jeff Heck, Monday Night Brewing exists to deepen human relationships over some of the best beer in the country. Brewmaster Peter Kiley oversees brewing operations at both West Midtown and the Garage. Find out more about their award-winning selection of beers at www.mondaynightbrewing.com.