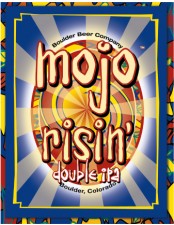 Boulder, CO – On January 9, 2012, Boulder Beer Company will release their MoJo Risin’ Double IPA.  First released in 2007, this will mark the beer’s sixth year in the seasonal lineup.

MoJo Risin’ Double IPA is a souped-up, extreme version of the one and only MoJo India Pale Ale brewed by Boulder Beer Company.  Taking the MoJo IPA recipe to the next level, the brewers add 50% more malt and twice the amount of Amarillo hops.  The double dry-hop addition elevates the grapefruit-like aroma and flavor to an outrageous intensity, while the added malt raises the alcohol level from 7% all the way to 10% by volume.

MoJo Risin’ will be available to all 37 states where Boulder Beer is sold in 12 ounce 4-packs, 22 ounce bottles, and draft.  New in 2012, MoJo Risin’ kegs will also be available on NITRO for specialty craft beer accounts that have designated nitro draft lines.  The nitrogenated version is smooth and creamy, softening the hop bite without removing any of the flavor.