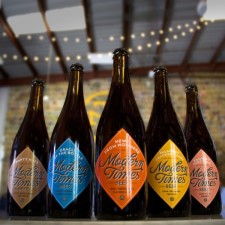 After much toiling & waiting, Modern Times‘ sour beers are finally ready to drink! Each of these beers spent 15 months aging in red wine barrels with a host of different cultures. All of the beers were fermented initially in stainless steel with our house Lomaland yeast blend, before being transferred to red wine barrels & pitched with bugs. Mike Tonsmeire (aka The Mad Fermentationist) sourced a different blend of cultures for each barrel from sources all over the world, making this among the most diverse & wide-ranging sour experiments on record. The bug mix contained 40 different cultures containing innumerable strains of Brettanomyces, Lactobacillus, & Pediococcius. All of these beers will continue to evolve with age.

EMPTY HATS
Empty Hats is our red wine barrel-aged Oud Bruin. It features loads of dark fruit, horse blanket, and oak in the aroma. The flavor starts with a big red wine component, quickly followed by a strong tartness, funk, and a hint of warm malt on the finish, which lingers for ages. This is a very complex & extremely flavorful beer featuring the most red wine character of our sours.

NEWS FROM NOWHERE
New from Nowhere is our red wine barrel-aged Flanders Red. The aroma is bright with cherries, vanilla, & funk. The flavor starts out with raspberry, strawberry, and oak, quickly followed by a puckering sourness, and a long, red fruit-drenched finish. A bit lighter in body & tarter than Empty Hats, News From Nowhere is intense while offering a nuanced array of flavors.

RAMPART JUNCTION
Rampart Junction is our red wine barrel-aged peach sour (Empty Hats is the base beer). After 11 months in red wine barrels, we added 50lbs per barrel of fresh, organic, heirloom peaches, which spent 5 months in the barrels before bottling. The resulting beer is completely saturated with fresh peach flavor & aroma, complimented by a hugely funky aroma & a strong sourness. Rampart Junction is a laser beam of sour peach awesomeness.

ORACLE OF THE BOTTLE
Oracle of the Bottle is our red wine barrel-aged Cabernet grape sour (News From Nowhere is the base beer.) After 11 months in red wine barrels, we added 50lbs per barrel of Cabernet grapes, which spent 5 months in the barrels before bottling. The resulting beer is very tart & bright, with a gorgeous blood red hue and a wine grape saturated finish. Oracle of the Bottle is a fascinating marriage of sour beer & wine.

PALACE OF CRACKED HEADS
Palace of Cracked Heads is our red wine barrel-aged nectarine sour (Empty Hats is the base beer.) After 11 months in red wine barrels, we added 50lbs per barrel of fresh, organic, heirloom nectarines, which spent 5 months in the barrels before bottling. The resulting beer is saturated with fresh nectarine flavor & aroma, complimented by a hugely funky aroma & a loads of sourness.

BOTTLE PURCHASE DETAILS:
Starting Thursday, December 4th 2014 at 10:00am, you will be able to purchase tickets good for up to 3 bottles of Empty Hats, 3 bottles of News From Nowhere, 1 bottle of Rampart Junction, 1 bottle of Oracle of the Bottle, and 1 bottle of Palace of Cracked Heads. You will be able to pick-up your bottles at the Lomaland Fermentorium tasting room during the period from 12pm on Thursday, December 11th, 2014 until 10pm on Thursday, February 12th, 2015. Unfortunately, no exceptions can be made to either the bottle limit, nor the pick-up window. You cannot pick-up your bottles at the North Park Flavordome. **Any bottles not retrieved by Thursday, February 12th 2015 will be surrendered back to the brewery (no exceptions).**

RELEASE PARTY:
Your tickets admit you to a release party on Thursday, December 11th, 2014 at the Lomaland Fermentorium tasting room starting at 12pm. This will be the easiest and most fun day to pick-up your bottles. We will have some cool stuff on-tap, and it’ll be a damn good time. If you’ve been meaning to visit us to buy some of our super rad tulip glasses, a couple bags of our awesome house roasted coffee, and a shirt or two, this is the time to do it.

ADDITIONAL DETAILS:
In order to pick-up your bottles, you will need to show your valid photo ID; it must be your ID and the name must match that of the ticket buyer (i.e. only you can pick up your bottles; no proxies). Any sales that attempt to work around the bottle limit will be voided. Only purchase bottles if you are 100% positive you can pick-up your bottles within the pick-up window; any bottles not picked up before February 12th, 2015 will be surrendered back to Modern Times Beer.

REFUNDS AND EXCHANGES:
Please note that we will not issue refunds, exchanges, or returns. All sales are final.

The Rare Barrel Founders Club Release #5 | Apropos of Nothing Is It Time To Streamline Port Brewing/Lost Abbey?