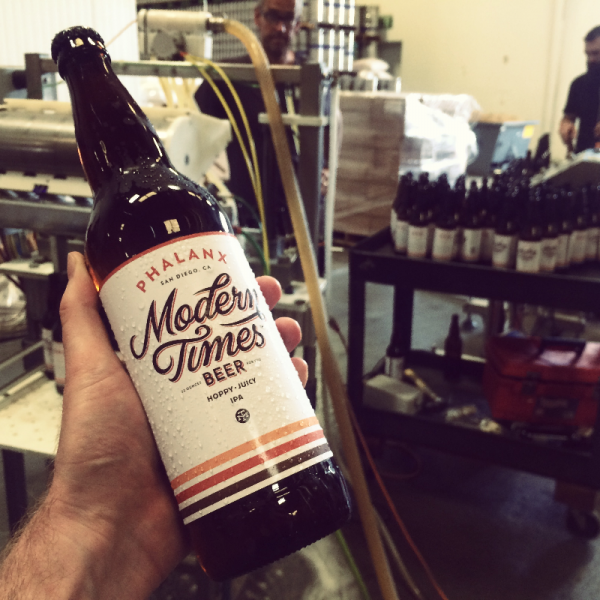 The batch going into bottles is drier, lighter in color & body, and good bit hoppier than the batch on-tap in the tasting rooms. We think it’s a more refined, intense, and hop-focused version of the beer, and we’re really, REALLY digging how it turned out.

Bottles are available for purchase tomorrow in both of our tasting rooms for $7.99; there is no bottle limit. Phalanx will start showing up on shelves around SoCal starting next week.

In other news, The Mad Fermentationist is (almost) back! After spending two months with us last year, Mike is joining us again this summer for a week of blending and bottling sour beers.

On Sunday, August 10th, Mike will be leading a discussion & tasting featuring 5 hearty pours of Modern Times sour beers. This is your chance to drink 5 extraordinary sours (including beers that were not poured at the Anniversary Party) while hearing one of the foremost experts in the field explain the intricate process of making them. He’ll explain bug sourcing, recipe formulation, brewing, fermenting, barrel-aging, and fruit additions, while reserving plenty of time to answer questions. Tickets are available here.

If you can’t make it to the tasting, we’ll be hosting a book signing/mix ‘n mingle event with Mike on Thursday, August 14th from 6-9pm at the Lomaland Fermentorium. We’ll have copies of his incredible, standard-setting new book, “American Sour Beers”, available for purchase, which Mike would be happy to sign for you. This event is free.