(Austin, TX) – Jester King Craft Brewery founder shares a tale of how his well thought out homage to lambic inspired beer making process was squashed by the High Council for Artisanal Lambic Beers. Here are Jeffrey’s very kind and diplomatic words in response to a pretty absurd request.

Simmering in the background for much of 2017 has been a disagreement between Jester King and the High Council for Artisanal Lambic Beers (HORAL). The disagreement is over our use of the term “Méthode Gueuze”. We adopted Méthode Gueuze as the style description for our three-year spontaneous blend released in 2016, and attempted to establish Méthode Gueuze as a new, certified style of beer. 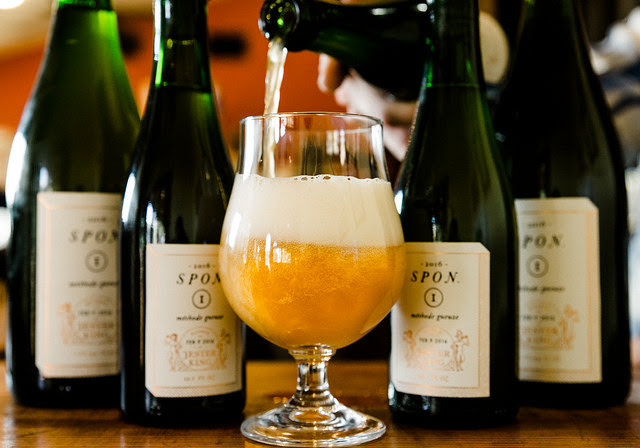 Our motivation was to deal with the problem of what to call Lambic and G(u)euze inspired beer made outside of the traditional region of Belgium. We wanted to make clear to beer drinkers that our beer was made following the traditional recipe and technique of G(u)euze, but was not made in the traditional region, and therefore is not authentic. We also wanted to help establish a set of standards for brewers pursuing Lambic-inspired spontaneous fermentation outside of Belgium. The terms “Lambic” and “G(u)euze” have been thrown around fairly causally in the past when it comes to sour beer, and we wanted it to actually mean something when a beer is said to be inspired by Lambic or G(u)euze.

It was with this mindset that Méthode Gueuze was adopted. We were bolstered by the support of Jean Van Roy of Brasserie Cantillon, and announced the terminology and certification effort last November. In hindsight, we should have done more to secure the support of other traditional Lambic producers, namely HORAL. In our estimation, if we came up with a solution for what to call Lambic-inspired beer made outside the traditional region, but alienated a significant portion of the Lambic community in the process, then we have failed.

Our intent has been to approach this topic in a respectful manner, as we’re a seven year old brewery that has been doing spontaneous fermentation for only five seasons, and the traditional producers have been making Lambic for decades, if not centuries. On top of that, it’s their tradition, not ours. We’re just the new kids who discovered what the masters have been doing forever, often times in total obscurity, grew to love what they do, became hugely inspired, and wanted to see if their traditional methods would work 5,000 miles away.

Back in March, we received a letter from HORAL voicing their displeasure with Méthode Gueuze. To be honest, when we got the letter, we went through a gamut of different emotions and seriously considered telling HORAL to “get lost” in so many words. However, in the end, we came back to the principle that our efforts will have failed if they result in a significant portion of the Lambic community being at odds with us. It was in this spirit that we reached out to HORAL for a sit down meeting to discuss the disagreement. HORAL graciously agreed to the meeting, and back in June, we travelled to Lot, Belgium to meet with them. We were accompanied by James Howat of Black Project Spontaneous & Wild Ales in Denver, Colorado.

First off, HORAL was a very kind and friendly host, and showed us great hospitality for which we are very appreciative. As we knew going in, HORAL did not approve of the term Méthode Gueuze, and it became apparent that they did not appreciate the words “Lambic” or “G(u)euze” being used in the fanciful name or stylistic description of Lambic-inspired beers. We can empathize with their position, as it is their tradition, and we can see how in their eyes we might come across as interlopers trying to profit off of what they’ve been doing for ages.

They did however agree that there is a problem with what to call Lambic-inspired beers made outside the traditional region and were supportive of Lambic-inspired beers in general. They also had no problem with the terms “Lambic” and “G(u)euze” being used outside of the fanciful name and stylistic description of the beer (for instance, writing on the back of the label that “this beer is inspired by Lambic”). Based on this, HORAL proposed an alternative term “Méthode Traditionelle”, in reference to beers made following the traditional method of making Lambic and G(u)euze, but outside of Belgium. While there was some initial hesitation on our part because a lot of things can be made following a “traditional method”, we agreed that in the context of Lambic-inspired spontaneous fermentation, Méthode Traditionelle works. In other words, we’re signifying that we made spontaneous beer following a traditional method, and are free to expound or elaborate on the fact that the traditional method comes from authentic Lambic and G(u)euze.

Sure, we would have ideally liked to have drawn a more direct connection, à la “Méthode Gueuze”, or by extension “Méthode Lambic”. But we highly respect HORAL’s position and have no desire to create the impression that our beer is authentic Lambic or G(u)euze. As we’ve stated many times over the years, our spontaneous beer is not Lambic or G(u)euze! And once again, what good is a new style description if a significant portion of the traditional producers are at odds with it? We have no desire to create life long enemies. We respect these brewers, their families, their ancestors, and the incalculable time they’ve put in over generations carving something out of nothing. We don’t want to disrespect that, even if it was far from our intent. These are several of the brewers that helped inspire us in the first place after all. And frankly, carving out our own tradition and legacy of making beers unique to the microflora, climate, and ecology of the Texas Hill Country is way more important to us than anything else. While we’re hugely inspired by and respectful of the Lambic tradition, our main purpose is to make beers reflective of our own time, place, and people.

The bottom line is that our 2017 three-year, G(u)euze inspired blend to be released this fall will not bear the moniker “Méthode Gueuze”. It will rather carry the style name “Méthode Traditionelle”. Similarly, we will not continue to pursue the certification for Méthode Gueuze. However, we’ve continued to work with some of our most respected American colleges producing spontaneously fermented beer on the Méthode Traditionelle alternative. We still desire to see standards in America and elsewhere when brewers pursue Lambic inspired beer. More information about the initiative can be found HERE.

We appreciate all the support we’ve received over the last year or so. It means a lot to be part of a passionate community where there may be disagreement, but ultimately, everyone in our experience is respectful and comes at it from a good place. We’re grateful to be part of it, and look forward to a bright future for beer and the beer community.