(Larkspur, CA.)  – Marin Brewing Company announced this week the release of their newest beer, Honey Badger Double IPA. The latest hoppy creation is the result of a collaboration with San Francisco-based Cellarmaker Brewing Company. The beer uses over 240 pounds of fresh wildflower Northern Californian honey, and a combination of Simcoe and Australian Galaxy hops. The punchy Double IPA comes in at 8% ABV and is currently on tap at Marin Brewing Company.

Cellarmaker Brewmaster and co-creator of the brew, Tim Sciascia, is a long time friend and former employee of Marin Brewing Company. 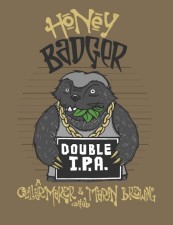 Marin Brewing Company Brewmaster Arne Johnson commented, “Tim and I have collaborated many times and it is always a success when we get together. We wanted to make something really unique this time. The result is a really bright IPA, but without the big alcohol percentage that usually accompanies it. The wildflower honey really lets the tropical fruit notes from the Australian Galaxy hops, and piney punch from the Simcoe shine through. We added a little honey malt to get the color and taste just right. I think the beer really combines both of our brewing styles and our IPA lovers are going to really enjoy it.”

Honey Badger Double IPA will be available at Marin Brewing Company by draft for a limited time and like its namesake, it’s pretty badass!

Find Out What Heavy Seas Will Be Bringing to GABF 2014! Did You Know Laughing Dog Brewing Will Be Going to The Great American Beer Festival This Year?