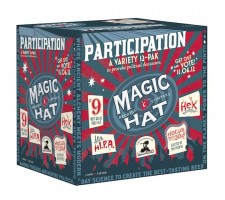 South Burlington, VT – Vermont-based craft beer brewer Magic Hat Brewing Company is set to release its quadrennial, democratically inspired variety of libations, the Participation Variety Pak. The Vermont brewer has again teamed up with voter registration organization HeadCount in a yearlong and energizing effort to encourage the message: Get out and vote!

To prime the voting palates of the public, Magic Hat began 2012 by asking registered craft beer lovers to vote their favorite Magic Hat beer of yesteryear into the Participation Variety Pak. And vote they did. Beloved brew Hocus Pocus beat out seven other beers to win a seat in this fall’s variety. The nation’s next stop is the presidential election, and the Participation Variety is just the conversation starter America needs as they discuss their political views this fall. Of course, every election of such significance needs a big shindig, and that’s why the 2012 political year will culminate with an epic bash – the Participation Party – in New York City on November 5th. The Participation Party features a ballot full of heady bands and heady jams, and will leave reveling voters with no doubt in their minds that their participation in the event was the right choice.

A Diverse Lineup to Please All Palates

Participation offers the voting and drinking public four finely fermented beers. Be you of the Wheat Party, the Hop Party or the Not Quite Pale Party, Participation has your craft beer interests represented:

#9® seeks to lead the nation into a Not Quite Pale period of flavor enlightenment.

Hocus Pocus, elected into Participation by the people, brings the will to chill to a thirsty nation in the form of a refreshing wheat beer.

hI.P.A. is the fall performer of the I.P.A. On Tour series and an ideal candidate to embitter your palate with hops, hops and more hops.

Hex® Ourtoberfest® is our fall seasonal that casts not a ballot, but a delicious spell, with five different malts, magnificent tones of toffee and a slightly smoky finish.

Participate in Drinking Lively Libations. And Don’t Forget to Vote.

The Participation Variety Pak will be in office from August 1st until October 15th, just in time to quench thirsts brought on by intense political debate. To participate in Participation, registered craft beer drinkers are encouraged to use the Sipcode Locator™ at www.magichat.net/sipcode. Samples of these four candidates are available upon request. Contact National Taste Supervisor, Dave Weissman, at (614) 396-7000, or email him at [email protected].

Experience a Performance in Every Bottle with the Magic Hat Brewing Company & Performing Arts Center, creators of #9®, Circus Boy®, a revolving roster of seasonal selections, the I.P.A. On Tour series of quarterly I.P.A.s and the Humdinger® series.