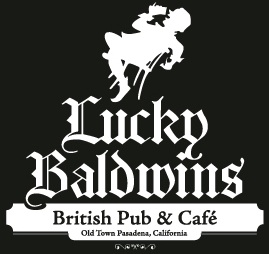 It is with great sadness  that we share the news of David Farnworth‘s passing today.  For those who don’t know David, he was the co-founder of Lucky Baldwins in Pasadena, CA.

We got word on this today from Bill Sysak (Dr. Bill) about the passing of Dave Farnworth, born September 27, 1952.

Dave was a dear friend of mine, who I will miss greatly! Even though his bar Lucky Baldwins masquerades as an English pub, it was actually the first Belgian centric beer bar in Southern California. In the late 90’s Dave introduced 1,000’s to beers like Orval & Cantillon. He loved Belgium and traveled their as often as he could. He was so revered for his work promoting Belgian ales that he was given an honorary knighthood by the Belgian Brewers Guild, as a  Knight of the Mash Staff. So the next time you drink a Belgian ale give a little toast to Sir David.

David and Lucky Baldwin’s are a huge part of craft beer history. David, along with co-owner Peggy Simonian provided a Southern California land mark destination for good beer.  Many people, including myself, were introduced to the world of European classics and local treasures because of Lucky Baldwins.  While there is a new beer bar opening up seemingly every week, from the mid 90’s, up until recently, Lucky Baldwin’s was a place to find the finest of beers if you lived in Los Angeles.

I had a chance to meet David two years ago, before he became ill, and he was quite a fun character.  He had sent out an email that a specialty beer was going to be put on tap in a few hours. A beer I was looking forward to trying.  I went up to him, introduced myself, and whined to him that I really wanted to try that beer, but I had to get going soon, and couldn’t wait a few hours, and if he could still let my party and I try the beer.  He chucked and told me “too bad”, but then proceeded down to the dungeon below the pub to put it on tap for us. Everyone who does know David well knows that he acted salty, but was a lovable, kind soul. A lovable kind soul who brought us tasty craft beer well before it was the popular thing to do.

If you need your fix of fish and chips, a pint of English ale, and  a soccer match, head down to the original Lucky Baldwin’s on Colorado and Raymond and hoist a pint in David Farnworth’s honor!

We’d like to encourage you to leave kind words/fond memories of David or Lucky Baldwin’s in the comment section below. David’s memory will live on through the three Lucky Baldwin’s locations, one in Old Town Pasadena, one near PCC in Pasadena and one in Sierra Madre, CA. Please visit http://www.luckybaldwins.com/ for hours and contact information