(San Marcos, CA) – In anticipation of Dia De Los Muertos and inspired by the profound flavors of Mexican Chocolate, The Lost Abbey will be releasing it’s newest and very limited celebratory creation; My Black Parade. 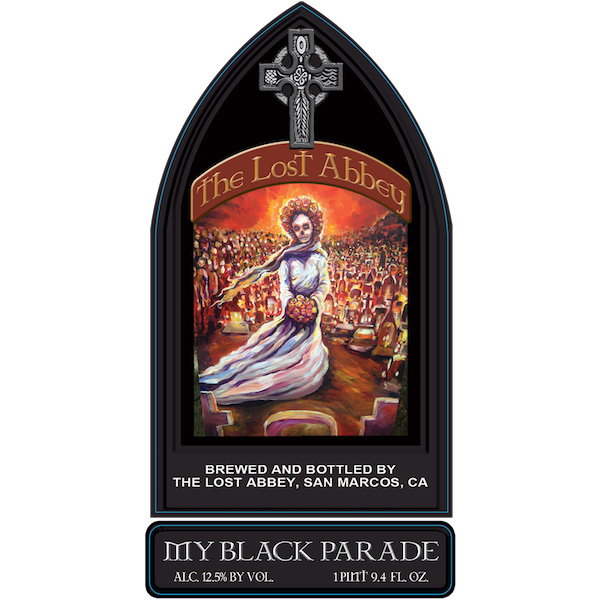 Continuing The Lost Abbey’s trend in being inspired by worldly religious-based stories, My Black Parade tells the story of unrequited love being remembered each year on Dia De Los Muertos. A crowd of believers, that grows with each procession, making a yearly pilgrimage to an unmarked grave, waiting for true love to show up.

A blended Bourbon barrel-aged Strong Ale with cocoa nibs, vanilla bean and spices, My Black Parade will be limited to only 60 cases with all inventory sold online through The Lost Abbey Website.

Pouring darker than a moonless night, My Black Parade begins with a deep bouquet of rich chocolate and layered hints of cinnamon and oak. Huge flavors of cocoa on the palate with notes of vanilla, bourbon, and tobacco, finishing with crisp bite from the smoked chili’s and cardamom.

The online sale will commence on Friday, October 9th at Noon (PST) with a 3 bottle per person limit at $41 (service charge included). Pickup for My Black Parade will be held over two days, October 30th and 31st during normal business hours in The Lost Abbey Tasting Room. Links and additional info will be made available on The Lost Abbey blog (lostabbey.com/blog) and throughout The Lost Abbey’s social media network.