The Lost Abbey Madonna and Child Debuts This Month

(San Marcos, CA) – Since 2006, The Lost Abbey has been experimenting with its Oak Aging Program, using barrels from across the spectrum of sprits, and now they will be releasing their second Tequila barrel-aged beer, Madonna and Child. 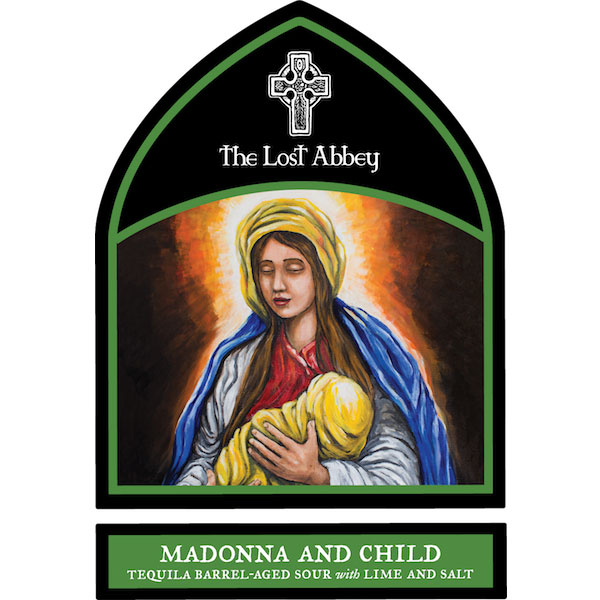 A dark sour ale with Lime and Salt, Madonna and Child was inspired by Southern California’s love for Margaritas.

Intense citrus aroma with just a hint of sweetness, Madonna and Child begins with a refreshing lime tartness, balanced with some dark sugar and ending with a splash of salt and some spice from the tequila.

“The blending process for Madonna and Child was an adventure in itself,” said Tomme Arthur, COO and Co-Founder of The Lost Abbey. “We really wanted to capture the essence of properly crafted Margarita which proved to be a nice challenge for our crew”.

Madonna and Child will be available throughout The Lost Abbey distribution network in the coming week.

About The Lost Abbey
Founded in 2006, The Lost Abbey produces an extensive line-up of continental and American- inspired ales and lagers. Under the direction of visionary brewmaster and co-founder Tomme Arthur, the brewery has garnered dozens of awards including the 2007 Great American Beer Festival Small Brewery of the Year, The 2008 world Beer Cup Champion Small Brewery and the 2013 Champion Brewery at the San Diego International Beer Festival. The company’s beers, many of which are aged in oak barrels for 12 months or longer, are universally recognized for their complexity, unique flavors and bold boundary-pushing styles. For more information, contact Port Brewing / The Lost Abbey / The Hop Concept at 155 Mata Way, Suite 104, San Marcos, CA 92069, telephone (800) 918-6816, and on the web at www.LostAbbey.com