(San Marcos, CA) — Spending the last 18 months developing its rich flavors in bourbon barrels, Barrel-Aged Serpent’s is finally ready to see the light of day. Beginning with a base The Lost Abbey’s Serpent’s Stout, this rich ale only increases in decadence after its tasty hibernation. 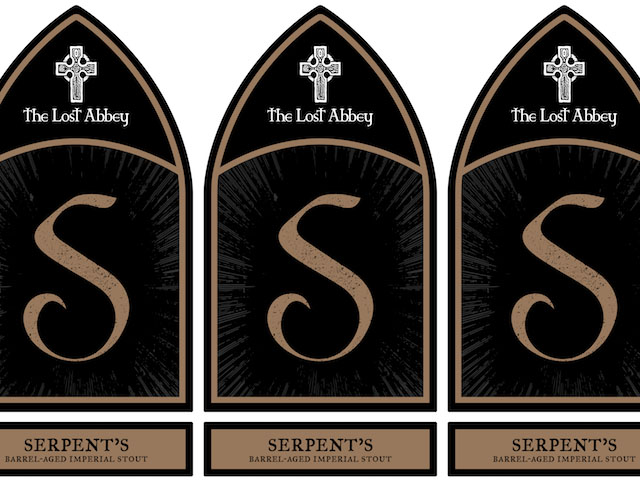 “Serpent’s Stout has always been a massive beer and one of the richest we brew” said Tomme Arthur, COO and Co-Founder of The Lost Abbey. “Allowing Serpent’s to sit and develop in bourbon barrels has only increased the depth of this already contemplative beer.”

Beginning with a robust nose of coffee and cocoa, Serpent’s opens up with deep chocolate and oak with hints of vanilla tobacco, ending with slightly sweet figs and a bourbon kick on the finish.

Barrel-Aged Serpent’s will go on sale Wednesday, September 27th at Noon PDT at shop.lostabbey.com. Bottles will be $30 and limited to 6 per person. Shipping will be available within the state of California if needed. Otherwise pickup will take place the weekend of October 13th at The Lost Abbey Tasting Room in San Marcos.