(Long Island City, NY)  -LIC Beer Project (www.licbeerproject.com) is excited to host its second annual Coronation Day on Saturday, May 5 to celebrate the anniversary of Pile of Crowns, the brewery’s first Imperial India Pale Ale that was ever released. In addition to Pile of Crowns, LIC Beer Project is dropping two new Imperial IPAs in cans: Interstellar Overdrive and Cosmic Kiss.

Pile of Crowns (8.5% ABV) is LIC Beer Project’s most treasured hoppy beer and is exclusively released on Coronation Day. This explosive, full-bodied Imperial IPA features intense additions of Citra, Mosaic, and Nugget with prominent overripe mango, peach, and nectarine with undertones of citrus and blueberry. Pile of Crowns finishes with accents of pine, and earthy resinous hop bitterness.

“Coronation Day signifies the importance and celebration of Pile of Crowns, the first hoppy beer I desigined and released in cans,” Daniel Acosta, Founder and Head Brewer at LIC Beer Project, said. “The concept behind Pile of Crowns harmoniously brings together two forms that I most passionate about, beer and art. I teamed up with Keith Neltner of Neltner Small Batch in Kentucky to design can art that was inspired by Jean-Michel Basquiat and Keith Haring, who are two of my favorite artists.”

Interstellar Overdrive (8.5% ABV) is double dry hopped with Mosaic, Motueka, Vic Secret, and El Dorado. Interstellar Overdrive is based on Japanese animation. The can art features four space fighting heroes defending their city from the evil villan “Cosmic Kiss” a robotic octopus. Each can in the four-pack will feature its own space fighting hero. The story continues with Cosmic Kiss. 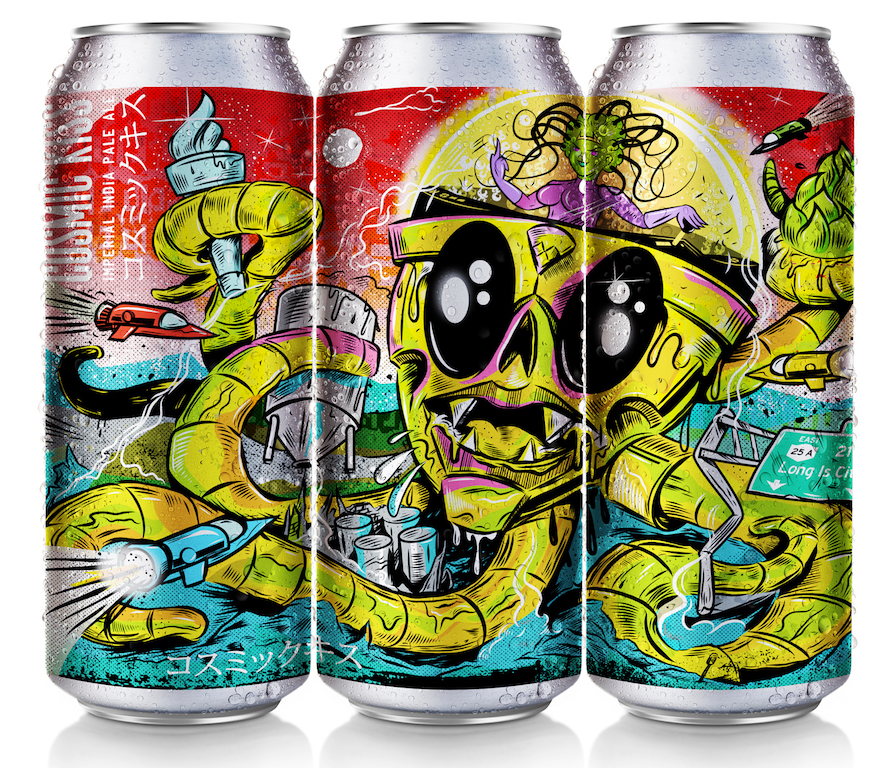 “Interstellar Overdrive and Comic Kiss are a fun and playful observation of early days of the New England Style IPA. There was a time when the West Coast IPA defined hoppy beer. Times have changed, New York and the entire Northeast region is real beer destination today, especially our home NYC. We’ve defended the style we all adore, the hazy, juicy, exceedingly aromatic IPA. The support of beer enthusants waiting in line and trading beers has brought this aweome style to global recongition. I coudnt think of any other way to show appreciation then to tell a story through our beers. Coronation Day emobdies everything I love about this industry,” said Acosta.

Each beer is packaged in 16 oz 4-packs and released in the tap room at 12pm, Coronation Day celebration will immedialtely folllow. Cosmic Kiss and Interstellar will be sold at $20 per 4-pack and Pile of Crowns will be sold at $22 per 4-pack. LIC is also releasing a special surprise beer, which will be announced at the event.

Music will be performed by local artist DJ Rob Swift, hip hop DJ and original member of the turntablist group, The X-Ecutioners. DJ Swift won the DMC East Coast title in 1991 and was featured on hip hop radio shows and documentaries. He also collaborated with artists such as Linkin Park, Cypress Hill, Good Charlotte, and Blue Man Group.

Food by local resturant Juquila Kitchen and Bar (specializing in authentic Mexican cuisine) and Larchmont’s Bona Bona Ice Cream (homemade innovative ice cream), will be available for purchase during the event. Doors open 12pm. This is not a ticketed event.

LIC Beer Project was founded by Daniel Acosta in 2015 in Long Island City. It is the first brewery in New York City to feature coolship (spontaneous fermentation vessel). The 20 bbl brewery specializes in experimental hop forward and Farmhouse Style Ales. LIC Beer Project produces limited batches of cans and bottles and consistently collaborates with craft breweries. LIC Beer Project is a collaborative journey of insight, experience, travel, education and the goal to achieve a beer we have yet to discover.