(LONGMONT, CO) – Left Hand Brewing Company, industry pioneers in Nitro beer styles and technology, continues to innovate in this space by releasing the first ever Nitro Mixed 8 Pack. Craft beer fans across the country will now be able to experience four different Nitro beers at once, including three core beers and a rotating seasonal making it the perfect trial pack. 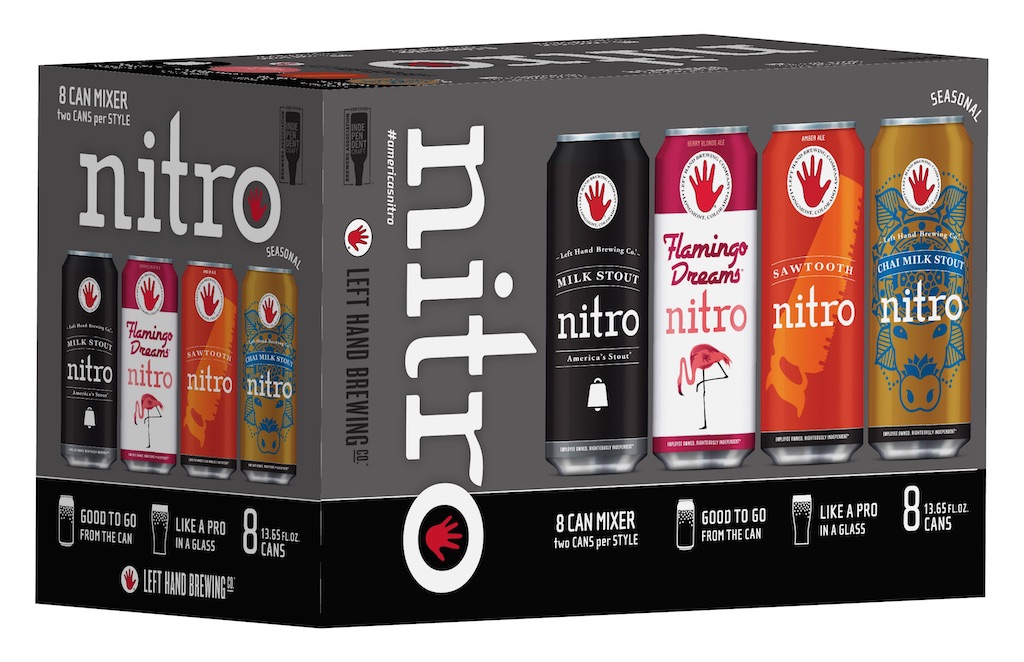 The three core brands in the new 8 Pack include: Milk Stout Nitro, the number-one selling craft stout in the U.S., Flamingo Dreams Nitro, the wildly popular berry blonde ale that debuted earlier this year, and Sawtooth Nitro, developed from the brewery’s multi-award winning original flagship. The first seasonal included is Chai Milk Stout Nitro, with all of the quintessential spices perfectly situated for the fall.

“We just keep pushing,” said Jill Preston, Director of Marketing at Left Hand Brewing. “Nitro is part of who we are, and we’re driven to continue to be the innovators and leaders of the style. Now more than ever craft beer drinkers want variety, and we keep finding unexpected ways to surprise them with new Nitro offerings. These Mixed 8 Packs are truly unique and provide more opportunity for us to showcase our Nitro creativity as we regularly change up the seasonal included.”

The release of the new Nitro Mixed 8 Pack coincides with the biggest beer festival in the country, GABF. Special promotions begin in Left Hand’s Tasting Room in Longmont, just north of the Denver event, starting Oct. 3:

Left Hand will continue to have a strong presence in Denver during GABF with new and returning annual events including:

Left Hand Brewing Company, founded in Longmont, Colorado, is one of the original pioneers in craft brewing. From a humble homebrew kit beginning to becoming one of the top 50 craft breweries in the U.S., Left Hand has continued to grow and innovate throughout our 26-year history. Famous for our nitro series, Left Hand launched America’s original nitro bottle with our flagship Milk Stout Nitro and the first production run of U.S.-made nitro widget cans. We’re proud to be one of the most honored and recognized breweries in Colorado with 29 Great American Beer Festival medals,11 World Beer Cup awards, and 9 European Beer Star awards. Our collection of perennial and seasonal beers are available in 43 states, DC and internationally. To learn more, please visit www.lefthandbrewing.com.