(LONGMONT, CO) – It’s flocking here! Left Hand Brewing Company is introducing Flamingo Dreams Nitro, a year-round nitro beer that’s the first of its kind. Bursting with raspberries and blackcurrants and ready to jam, this berry blonde ale pours a striking pink. At 4.7% ABV, it’s super smooth and refreshing with a berry burst, frisky zing and nitro glide that will bring out your vibrant side, especially poolside. 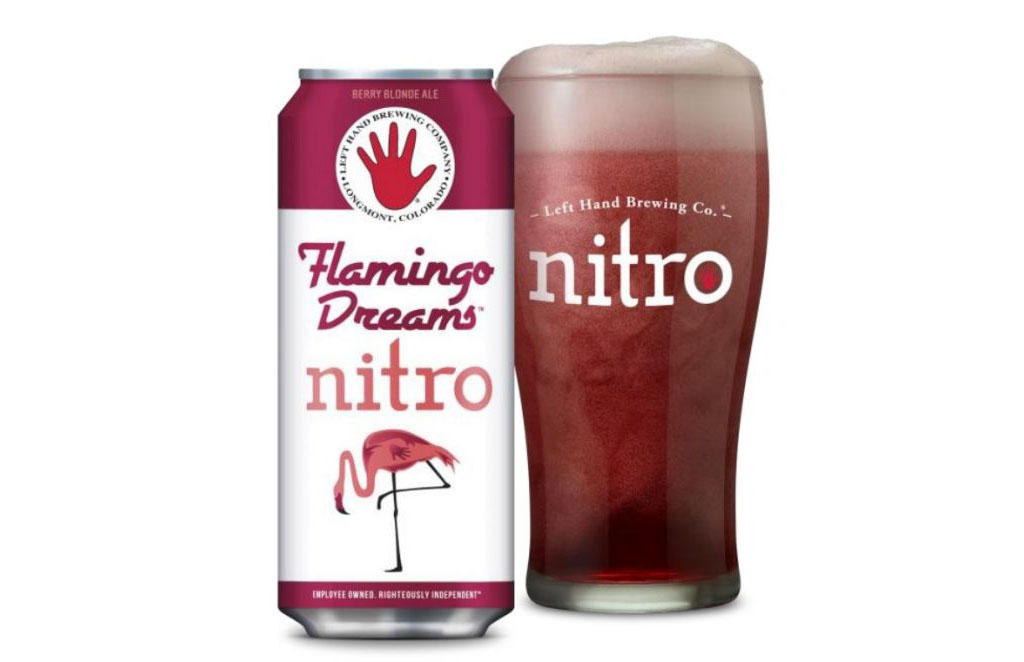 “When most people think about a great nitro beer, they tend to go the darker route with stouts and porters. Our brewing team saw the opportunity to innovate by creating a lighter, fruit-forward nitro beer that’s super smooth while at the same time refreshing and crushable,” said Jill Preston, Director of Marketing, Left Hand Brewing. “You can’t find another beer like this on the market. It will definitely make you think differently about nitro beers.”

Left Hand Brewing is a leader in nitro innovation and nitro experience. In 2011, Left Hand made history and pioneered the way for beer drinkers to enjoy a draft-like experience at home with the release of its flagship Milk Stout Nitro bottles and the hard pour. In 2017, Left Hand was back at it again with the first ever U.S. production run of a U.S-made nitro widget can from Ball Corporation. With the widget inside technology, nitro fans can take the beer on the go and drink a perfectly smooth and creamy Milk Stout Nitro right from the can.

Flamingo Dreams Nitro will be flying onto shelves and cascading from taps this month. Check out the flocking fabulous launch events Left Hand has planned across the country. In addition, Left Hand Brewing will be debuting a national, social media advertising campaign featuring an animated video that brings Flamingo Dreams Nitro to life.

Flamingo Dreams Nitro is now available in 4pk and 6pk (market dependent) 13.65oz cans and on draft. Check out our beer finder for Flamingo Dreams in your area.

Left Hand Brewing Company, founded in Longmont, Colorado, is one of the original pioneers in craft brewing. From a humble homebrew kit beginning to becoming one of the top 50 craft breweries in the U.S., Left Hand has continued to grow and innovate throughout our 25-year history. Famous for our nitro series, Left Hand launched America’s original nitro bottle with our flagship Milk Stout Nitro and the first production run of U.S.-made nitro widget cans. We’re proud to be one of the most honored and recognized breweries in Colorado with 29 Great American Beer Festival medals,11 World Beer Cup awards, and 9 European Beer Star awards. Our collection of perennial and seasonal beers are available in 43 states, DC and internationally. To learn more, please visit www.lefthandbrewing.com.