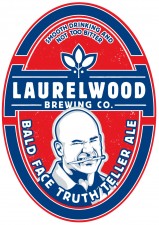 (Portland, Oregon) … 95.5 The Game (KXTG) Afternoon Drive Host, John Canzano has been honored by the Laurelwood Brewery with the upcoming release of the “Bald Faced Truth Teller Ale” on November 4, 2010. The brew is named after Canzano’s aptly titled afternoon program on 95.5 The Game as well as for his Bald Faced Truth Foundation, a non-­‐profit organization which funds extracurricular activities for kids by offering grants to children who wish to participate in the areas of arts, music, drama, education, athletics and other enriching activities.

Canzano will broadcast his radio show live from Laurelwood Public House and Brewery (5115 NE Sandy Blvd, Portland) on Thursday, November 4th, the day the special brew is released, 3-­‐6pm. Laurelwood will in turn donate 15% of sales that day to the Bald Faced Truth Foundation. The Bald Faced Truth Teller brew will be available to consumers through the end of the year.

Laurelwood is a family owned brewery that creates one of the most recognized regional products of craft beer. Dedicated to sustainable and organic practices, Laurelwood first began producing certified organic beer in 2002. Laurelwood’s craft beer is recognized for its creativity and quality and the company has won many national and international awards. The company’s handcrafted beer can be found on draft and in bottles throughout Oregon and Washington. “I’m honored that people make me a part of their day when they listen to the radio show or read my columns, humbled further that they’d drink a wonderful Laurelwood beer crafted in my dome’s honor,” commented Canzano.

95.5 The Game is the play-­‐by-­‐play home of the Portland Trail Blazers, Oregon Ducks, Seattle Seahawks and the Portland Timbers, along with delivering the most in-­‐depth, expert sports analysis and late breaking sports news every day.