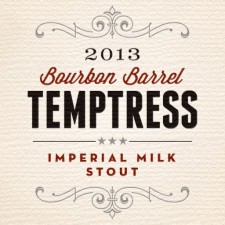 During regular tour hours, from 12:00 p.m. to 3:00 p.m., LBC will tap its first keg of Bourbon Barrel Temptress. That’s not all. LBC will also have a limited quantity of Bourbon Barrel on a nitro tap, for those who want to experience the creamier, smaller bubble effect that a nitro tap can give.

The first 200 lucky folks to make it out on Saturday will receive a very special commemorative Bourbon Barrel Temptress souvenir glass. Since BBT is so limited in quantity, it will only be one BBT per person, in addition to other LBC beers.

“For approximately four to five months, Temptress is aged in spent Bulleit Bourbon barrels. The Temptress soaks up the natural flavors that come from barrels, imparting some hints of vanilla, a little bit of oak, and the subtle taste of bourbon. It’s rich, and incredibly smooth.”

Bourbon Barrel Temptress will be distributed to bars and restaurants beginning December 9, and soon to follow will be 22 oz. bottles available at retailers who carry LBC. More specifics on bottle distribution dates coming soon so stay tuned.