(Dallas, TX) –  Lakewood Brewing Company is excited to release the first of 3 beers in a miniseries within their limited Legendary Series brews, which will span over a year period. The Legendary Series is LBC’s specially brewed beers inspired by both worldly and local myths and legends, each brewed only once with the intention of never being brewed again.

The Trilogy chosen for this project is based on the famous legend of the 3 Fates – Clotho, Lachesis, and Atropos. The three sisters determined the fates of both Gods and mortals alike with their infamous thread of life. One sister spun the thread (birth), one sister measured the thread (life), and one sister cut the thread (death). 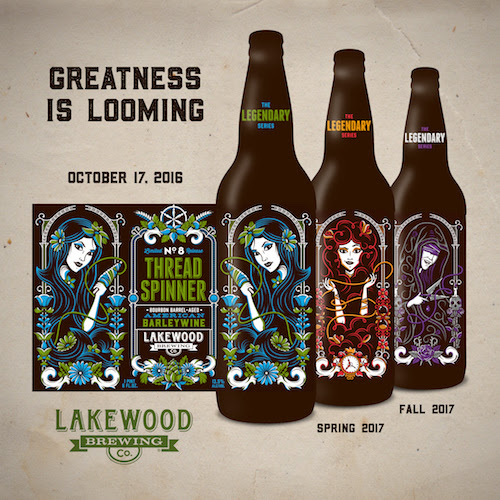 “We’ve always been forward thinking at the brewery, and came up with this Trilogy concept to create an experience and anticipation for our Legendary Series fans,” stated Wim Bens, Founder & President of Lakewood Brewing Company. “Three different wood-aged beers will be released 6 months apart, each reflecting their own unique, beautiful characteristics. The first is Thread Spinner, an American Barleywine aged in freshly-emptied bourbon barrels from our friends at Witherspoon Distillery in Lewisville.”

Wim says this “beast of a beer” is ready to drink now or can be preserved to age with the other two beers coming out next spring and fall, should fans choose to wait and enjoy all three in a perfectly aged vertical at the end of the series release next year. Grand Allowance will be a wine barrel-aged wheat wine slated for a spring release, and Grim Shearer will be a barrel- aged rye wine slated for a fall release.

The brewery once again enlisted the artistic talents of illustrator Nathan Walker to create the visually dynamic bottle art for the series. “We want to capture someone’s attention immediately, and Nathan’s art is always phenomenal at doing just that,” stated Bens. “Once all three are released, you’ll be able to put the three bottles together for a beautiful, eye- catching triptych.” LBC has also used Walker’s illustrations for their Seduction Series and DFW collaboration brews.

Collectors and craft beer fans can be watching for Thread Spinner to be released starting the week of October 17 both on draft and at select craft retail locations in DFW, with additional markets to follow in the coming weeks. Be watching for the second of the Trilogy release, Grand Allowance, in stores next spring.

About Lakewood Brewing Company:
Lakewood Brewing Company produces internationally inspired, locally crafted beers. Its diverse varieties include year-round, seasonal, and small-batch brews including the Legendary and Seduction Series. Lakewood has been recognized nationally in major beer competitions and has brought home awards for many of their beers, notably: Placing second overall in the 2015 U.S. Open Beer Championship with six medals, inc. a gold for the Saint Dymphna; winning three medals in the San Diego and Los Angeles International Beer Competitions, inc. a gold medal for its Bourbon Barrel Temptress; and earning a pair of Best in Region nods in the Best of Rockies/Southwest Region in the U.S. Beer Tasting Championship for Hopochondria and Zomer Pils. Lakewood beers are available throughout the DFW Metroplex, Austin and Central Texas, Corpus Christi, Abilene, Amarillo, Wichita Falls, Bryan/College Station and East Texas area in discerning bars, restaurants, and select retailers; perfect “for whichever neighborhood you call home”. For locations and more information, please visit lakewoodbrewing.com.