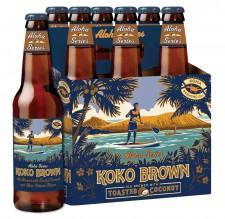 Kailua-Kona, Big Island of Hawaii, February 14, 2011… Kona Brewing has announced it will be bringing Koko Brown Ale to market, the first new beer available on the mainland from the brewer since 2007, and the third launch in Kona Brewing’s Aloha Series.

Koko Brown Ale’s nutty aroma and flavor comes from real toasted coconut brewed into each batch. It was first tapped at Kona’s Kailua-Kona pub in the summer of 2009 under the name Coco Loco.

The vintage artwork on Koko’s bottle and packaging depicts a stand-up paddler on the calm waters of Maunalua Bay, in the shadow of Koko Head and Koko Crater. Stand up paddling (SUP), or hoe he’e nalu, is one of the fastest growing recreational sports in the world. Paddling served as the ancient Hawaiians’ mode of solo transport in visiting remote villages and fishing grounds, and today, SUP competitions often launch at the docks below Kona Brewing’s Koko Marina pub. Kona Brewing sponsors a number of SUP competitions including Battle of the Paddle and Maui Jim Surf Monkey, as well as brand ambassadors Jenny Kalmbach and shaper Tom Pokahu Stone.

The 3rd in the Aloha Series, Koko Brown joins Wailua Wheat and Pipeline Porter in the Kona Brewing Company lineup. It will be available in 12 ounce bottles and draught February 21 through May 1, 2011 in the west coast states of Hawaii, Alaska, Washington, Oregon, Idaho, Montana, Wyoming, Nevada, California,   Colorado, Arizona, and New Mexico.

About Kona Brewing
Kona Brewing Company was started in the spring of 1994 by father and son team Cameron Healy and Spoon Khalsa, who had a dream to create fresh, local island brews made with spirit, passion and quality. It is a Hawaii-born and Hawaii-based craft brewery that prides itself on brewing the freshest beer of exceptional quality, closest to market. This helps to minimize its carbon footprint by reducing shipping of raw materials, finished beer and wasteful packaging materials. The brewery is headquartered where it began, in Kailua-Kona on Hawaii’s Big Island. www.KonaBrewingCo.com.