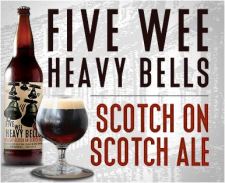 San Diego, CA – As part of celebrating 25 years pioneering San Diego’s craft beer scene, Karl Strauss is releasing the fifth edition in their innovative “12 Days” holiday ale series.  The series features high alcohol, cellar-friendly beers designed to be enjoyed this year or laid down and stored for future holiday celebrations.  The beer names in this series have a distinctly San Diego twist on the verses in the classic holiday song.  To date, the series has featured Four Scowling Owls – a Belgian Tripel, Mouette a Trois – a Holiday Fruitcake Ale, Two Tortugas – a Belgian Quad, and Parrot in a Palm Tree – a Baltic Porter.  This year’s release, called Five Wee Heavy Bells, is named after the famous bells at the Mission San Diego de Alcala and their “five golden rings” which can be heard in unison only once a year.

Five Wee Heavy Bells, like a fine scotch, is perfect for this holiday season and will get even better with age.   This malty scotch ale weighs in at a smooth 9.5% ABV and packs a deliciously warm finish. Rich caramel flavors provide the perfect backdrop to the beer’s pronounced scotch character.  “We took a traditional Scotch Ale and aged it on scotch-soaked American oak chips,” says Paul Segura, Brewmaster, Karl Strauss Brewing Company. “The scotch flavors balance the malty sweetness of the beer, and the whole process inspired us to call this bad boy a Scotch on Scotch ale.”

Fans can enjoy Five Wee Heavy Bells at Karl Strauss’ Tasting Room in Pacific Beach, at their eight satellite brewery locations, or at fine retailers, bars and restaurants throughout California.

The next pioneering release in our “Twelve days” series gets its name from the five famous bells of Mission San Diego de Alcala; whose “golden rings” can only be heard in unison once a year. Five Wee Heavy Bells is a smooth, malty scotch ale with rich caramel flavors and a warming finish. The beer’s malt sweetness is balanced by pronounced scotch characteristics; carefully developed by aging the beer on scotch-soaked American oak chips.  Whether you enjoy your bottle now or let it age for celebrations to come, Five Wee Heavy Bells is perfect for the holidays.

About Karl Strauss Brewing Company
Karl Strauss Brewing Company has pioneered the San Diego beer scene since 1989 with innovative beer releases like Big Barrel IIPA, Wreck Alley Imperial Stout and Mosaic Session Ale. The brewery has won 65 medals over the past four years and its Red Trolley Ale is one of the most award winning beers in the world. The company is currently ranked #41 on the list of the country’s top craft breweries with sole distribution in California. 2014 has been another exciting year of double-digit sales growth.