(San Diego, CA) — Back in February of 1989 Karl Strauss opened their historic downtown San Diego brewpub, which helped ignite the city’s vibrant craft beer scene. Since then the brewery has gone on to accomplish many things, most recently winning “Mid-Size Brewing Company of the Year” at the Great American Beer Festival last fall. 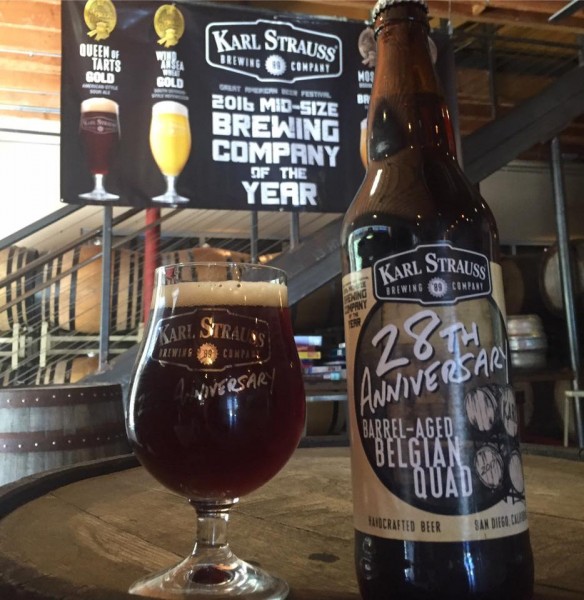 As part of their 28th Anniversary celebration, the brewery just released a barrel-aged version of Two Tortugas, their highly esteemed Belgian Quad. Two Tortugas has medaled in numerous beer competitions, including wins at both the Great American Beer Festival and the World Beer Cup. This award-winning Belgian Quad has been aging for a year in Four Roses bourbon barrels in anticipation of the 28th Anniversary release, and the resulting brew features flavors of dark fruit, caramel, and charred oak with a surprisingly smooth, warming finish.

The beer is available in 22oz bottles and on draft at select retailers throughout California, including KARL’s Tasting Room in Pacific Beach and at all of their brewpub locations.

“It’s been a huge year for us at Karl Strauss. We expanded our small batch program by opening satellite breweries in Orange County and Downtown Los Angeles, and we took home the honor of “Mid-Size Brewing Company of the Year” at the Great American Beer Festival. We have a lot to celebrate.” –Paul Segura, Brewmaster, Karl Strauss Brewing Company.