(DENVER, CO) – Fiction Beer Company was one 3 breweries to receive the prestigious inaugural Juicy of Hazy Pale Ale awards given at the Great American Beer Festival in 2018.  Together with the other medal winners, Tin Roof Brewing (gold) and Kings Brewing (Silver), they have collaborated to create ‘Electrum Bronze’ Hazy Pale Ale.  The collaboration haze will be released on June 22nd in 16oz cans and on draft, available only at Fiction Beer Company. 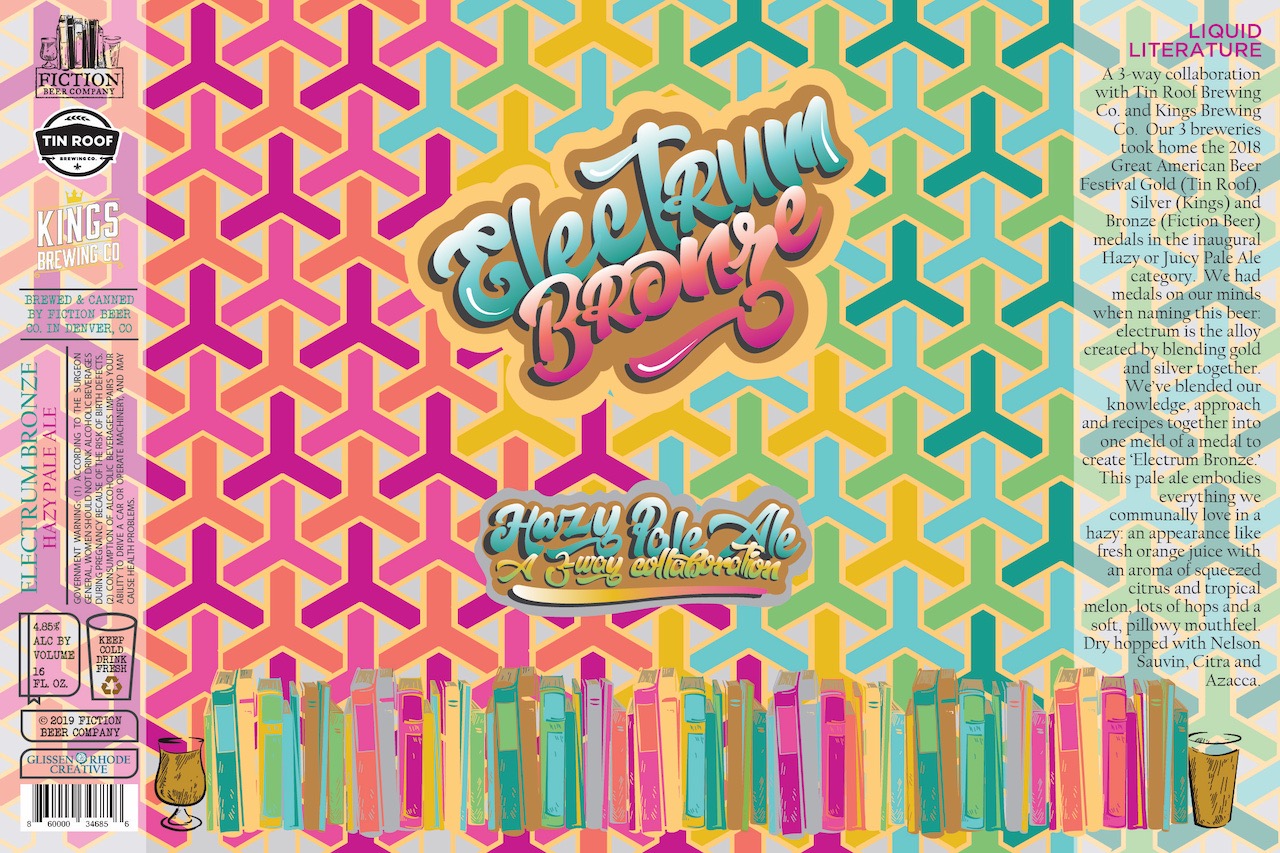 The 3 medal winning breweries sat down during the 2019 Craft Brewers Conference and together developed the recipe for ‘Electrum Bronze’ bringing together their combined knowledge and passion for the style.  Although these breweries are like-minded in their appreciation for the style; each of their processes used to craft the hazy pale ale style were different.  The experience of collaborating with other breweries always gives way to new ideas and thinking.

‘Electrum Bronze’ was designed with a simple pale ale base malt to provide the backbone to their beer.  To the base malt the brewers decided to add an array of high protein grains and malts that are the key to the trademark appearance and mouthfeel of the hazy styles.  Among these grains are wheat, malted oats, spelt and more.  How to approach the other characteristics necessary for the style: hop flavor and aroma?  Using very little hops on the hotside and lots of dry hops, this beer strives to achieve maximum retention of the coveted hop oils which provide the tropical and citrus notes so many crave.  Using over 5 pounds per barrel of Nelson Sauvin, Citra, and Azacca hops they were able to achieve an intense zesty citrus character that complements the complex ripe tropical melon and gooseberry notes.  An almost cream-like mouthfeel that envelopes the senses carries those ridiculously pleasing hop oils through the pallet allowing for a long lingering taste of hop heaven.  At 5.3%, you can enjoy the rich flavor of this beer in the heat of the day without being put down for an afternoon nap.

‘Electrum Bronze’ will be part of a triple can release at Fiction Beer Company (Denver, CO) on June 22nd.  Also releasing that day, ‘Washed Overboard’ Margarita Gose and ‘The League of Extraordinary Hopheads’ Double Hazy IPA collaboration with Odd13 Brewing and Cerebral Brewing.

Tin Roof Brewing Company was started by two childhood friends with a passion for beer and a desire to create their own southern, handcrafted brand. The dream was born when Charles Caldwell ventured out west in the early 2000s to work on a ranch in Colorado. During his stint as a ranch hand, Charles experienced an abundance of microbrewed beer and immediately fell in love. Upon returning, he was disappointed to find the deep south lagging behind in the craft beer world. The dream of building his own brewery was born, but it would take years before it came to fruition. Charles became a banker in his hometown of Natchez. Mississippi. He began making trips down to Baton Rouge to visit his childhood buddy, William McGehee, who was finishing up his law degree from Louisiana State University. William had also developed a palate for the finer beers during a law school summer abroad program in Europe. During one weekend trip and after indulging in a few beers, the topic of creating a brewery came up. The two decided it was now or never, and what better career change for a banker and a lawyer than to start brewing beer. After several years of hard work, their dream became a reality with their first batches of beer being produced for commercial consumption in November 2010.

Kings Brewing Company in Early 2013 went from a thought to possible a bit more than a thought, but we had no idea just yet. Founded by the Cooper brothers Jeremiah (President) and Demetrius (Vice President) Cooper in 2015. Jeremiah worked in the LTL Freight industry as an Operation Manager for 15 years and Demetrius worked in the Alarm / Surveillance industry for 20 years. Both brothers, being fed up with the politics of the corporate world, combined with a love for good brews decided to take the next step in making their dreams come true. The dream actually started when Jeremiah bought his first home brew kit from Bed Bath & Beyond. He took that kit home and made what he thought was the best blonde in the world and his family thought so as well. The next day Jeremiah, after doing some research online and using the knowledge he had gained from his first home brew kit (which was nothing), decided to go all grain. He tells the story of how his first batch of all grain home brew come out a 4 abv. of watery goodness (nastiness).  Determined to make that first beer again he began to read books and study some more, spending hundreds of dollars on home brew equipment. At that time Demetrius had been drinking those brews being made and jumped in on the home brewing almost right away. This is when they started brewing 3 or 4 times a week and got addicted to brewing. Then one day the two brothers had a serious conversation about selling everything they had and moving in together for a few years, which many may know is a sacrifice in itself both having families of our own and having to fit in one house all together. After several months of looking for a location we finally landed one in December 2015, and began taking steps to open Kings Brewing Company. Kings Brewing Company is most known for starting the haze craze in California and over fruited concoction.