(Austin,TX) – We’re very excited to introduce World’s Worst Twin, our oak barrel fermented farmhouse ale brewed in collaboration with Evil Twin Brewing. In April of 2014, Jeppe Jarnit-Bjergsø, the prolific and renowned owner of Evil Twin, came to Jester King to make a beer inspired by one of his favorite coffees, without actually adding any coffee to the beer. We used toasty, highly kilned malts in the mash to impart a roasty, chocolatey character, and Texas blueberries in the fermentation to provide some fruity notes and acidity. The beer took on additional complexity from a long, slow fermentation and maturation in oak barrels in the presence of native yeast and bacteria harvested from our land in the Texas Hill Country. 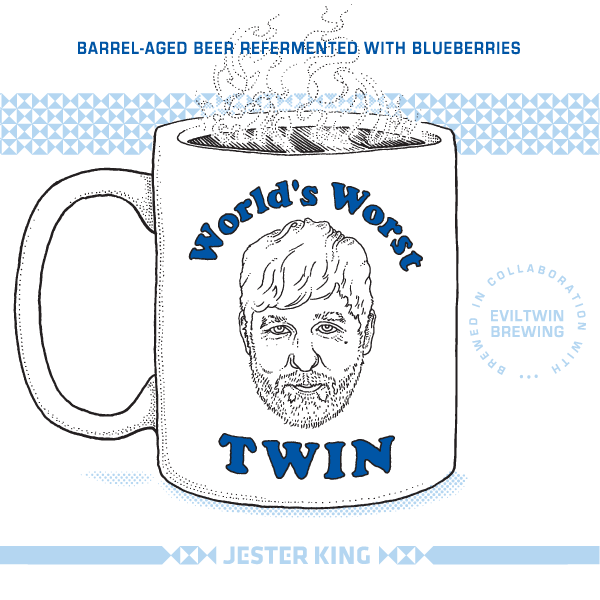 World’s Worst Twin was brewed with Hill Country well water, barley, oats, and hops. It was fermented in oak barrels for six months, followed by refermention with blueberries grown in East Texas. Finally, it was 100% naturally conditioned in bottles and kegs. World’s Worst Twin is 5.5% alcohol by volume, has a finishing gravity of 1.004 (1.0 degree Plato), and was 3.15 pH at the time of bottling in October of 2014.

World’s Worst Twin will be released on Friday, January 16th at Jester King Brewery when our tasting room opens at 4pm. It will be available by the glass, as well as to go in 750ml bottles ($16, limit 1 per customer per day). Approximately 1,600 bottles are available. The label art for World’s Worst Twin, as well as the art and design for the coffee/beer mug shown in the photo below, was done in-house by our own Josh Cockrell.

We’re very excited to announce that Jeppe himself will be at Jester King on Saturday, January 17th to celebrate the beer release! He’ll be at our tasting room throughout the day to meet with visitors to the brewery. We’re also excited that Jeppe will be taking part in two other unique events while he is in Texas. On the morning of Sunday, January 18th, he will join us for a special beer, coffee, tea, and pastry pairing at  Wright Bros. Brew & Brew in Austin, and on Sunday evening, he’ll join us for an Asian-fusion beer dinner at Hot Joy in San Antonio. The dinner is inspired by Jeppe’s brilliant retort to Chef David Chang’s ill-formed screed about craft beer. Chase Healey of Prairie Artisan Ales will also be taking part in the dinner! We’ll post more details about these two special events in the days ahead!

Sierra Nevada Launches 2015 With Three All New Beers Why Did Half Acre Brewing Change Heyoka IPA to Senita IPA?