(FRAMINGHAM, MA) – Jack’s Abby Brewing, the family-owned craft brewery with the mission of creating truly distinctive lagers, is pleased to announce this fall’s lineup of seasonal and specialty brews. The brewery will also induct Leisure Time Lager as core brand this fall; due to this wheat lager’s popularity as the summer seasonal, Leisure Time will now be featured year-round.

“We always look forward to this time of year because of the wide variety of lagers we feature—from extra hoppy to intensely malty brews,” says Jack Hendler, co-founder and Head Brewer. “Not only are we able to include more locally sourced ingredients from New England in the Fall, but we are able to harvest local hops and pumpkins, involving us in each step of the brewing process.” Each of the seasonal and specialty lagers continue the Jack’s Abby traditions of featuring locally-grown ingredients, traditional German brewing standards and American innovation:

Leisure Time Lager: Now available year-round, this lager is brewed with wheat and a blend of spices including lemongrass, coriander, orange peel and chamomile. A subtle spiciness balances the citrusy and floral hops added to the whirl and hopback. Year-round release. ABV 4.8%, IBUs 15. 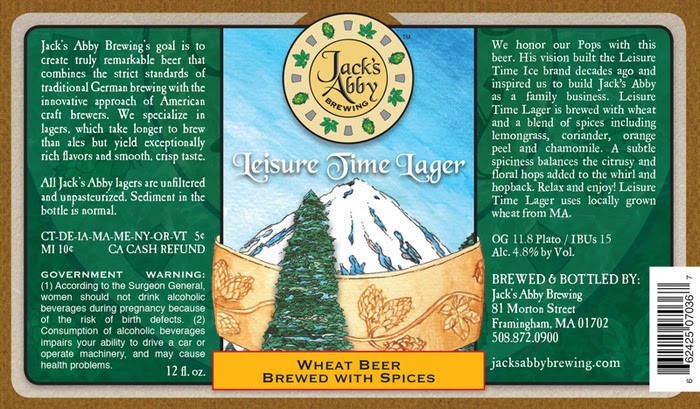 Fire in the Ham: This intensely smokey lager similar to those found in Bamberg, Germany. Most of this brew’s malt was dried over flaming beechwood, which ingrains unique smokey flavors. Aromas of campfires, smoked ham, and bacon dominate a soft malt and hop backbone. September release. ABV 5.4%, IBUs 20.

Wet Hop Lager: Part of the Mom & Pop’s Harvest Series, this seasonal beer features 100% locally sourced ingredients including hops grown by the founders’ Mom & Pop, as well as other New England farms. Malted barley, unmalted spelt and wheat provide the finishing touches for this brew. Not to be confused as an extra-hoppy beer, this is a nicely balanced and pleasantly hopped lager. September release. ABV 5.2%