(Delaware Valley, USA) –  On Friday, November 25, Iron Hill Brewery & Restaurant will welcome the holiday season with the release of seasonal favorite Reindeer’s Revenge in stylish 16-oz. cans. Reindeer’s Revenge is an American-style Belgian ale, filled with complex aromas and flavors of grapefruit, spice and banana, with a refreshing hop bitterness; and cans will be available for take-out in four-packs at all 12 Iron Hill locations. 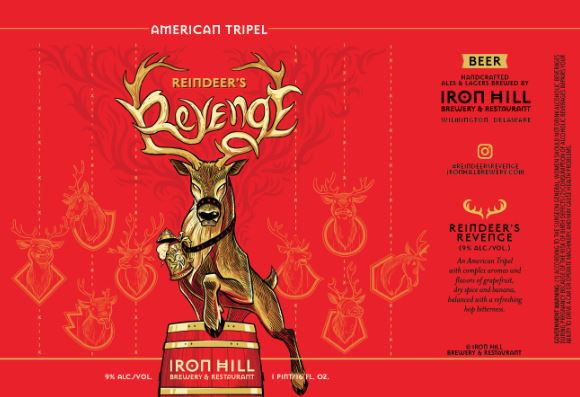 From November 25 through December 31, Iron Hill will be offering their most award-winning beers in special Bottled Reserves Packages, perfect for stocking stuffers this holiday season. The brewery’s Gold Medal Winners will include 750 mL bottles of the following gold-medal winners: The Cannibal (2005 Great American Beer Festival); Russian Imperial Stout (2006, 2010 Great American Beer Festival; and 2010, 2012, 2014 World Beer Cup); and Wee Heavy (2004 World Beer Cup). In addition, guests spending at least $75 on Iron Hill gift cards will be rewarded with a Snowflake Card, a bonus card worth $20.

About Iron Hill…Founded by home brewers Kevin Finn and Mark Edelson and restaurateur Kevin Davies in Newark, DE 20 years ago, Iron Hill Brewery & Restaurant has blossomed from one to 12 locations across the mid-Atlantic. Each restaurant is dedicated to producing and serving top-quality hand-crafted beers and cuisine in a warm and hospitable setting, and all are open seven days a week for lunch and dinner. In August 2016, The News Journal named them a “Top Workplace” in Delaware, the latest in a company-wide tradition of award and honors recognizing their achievements in business and brewing. Iron Hill has earned 45 medals from the Great American Beer Festival (GABF) in a record-setting winning streak of 20 consecutive years, the longest by any craft brewery in history; they have also earned the coveted “World Champion Brewpub” title at the World Beer Cup (WBC) three times. In 2014, Zagat honored Iron Hill by naming them the most popular restaurant in Philadelphia. They debuted their 12th location, in Huntingdon Valley, PA, in August 2016.