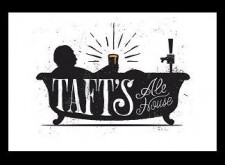 The Saint Paulus Kirche in the historic Over The Rhine neighborhood of Cincinnati has been resurrected and spared a dance with the wrecking ball. Instead, it will now house three gluttonous levels of brewpub progress under the nom-de-plume of one of the city’s favorite sons, William Howard Taft. The old church at 1429 Race St. will become Taft’s Ale House.

The eight-million-dollar Taft Ale House will be home to Moreland’s uniquely crafted ales and lagers, and will feature three year-round house beers chosen by patrons from our twelve taps on hand. The makings of each brew will be sourced locally and inspired by the restaurants, bars and specialty food retailers of the historical OTR brewing district. Nine of the twelve taps will rotate at all times, bringing a true craft beer experience to Cincinnatians and craft brew lovers the world over.

The Taft will feature three unique levels, offering three distinct experiences for patrons. Our first floor, or Big Billy’s Basement, will hold barrel-aged projects and a rotating tap of locally sourced brew. Our second floor, in true beer hall style, is the heart of the operation, pumping out 3,500-4,000 BBLs per year through a new oversized 10BBL DME system. There will be a wide open view of our entire process, including the eight 20BBL fermenters and eight 20BBL serving vessels stacked behind the main bar, and separated by a catwalk from the upper tanks to the lower tanks. Our third floor, or Brauzzine, will up the ante with a dining room that overlooks the brew house floor below. Sip faithfully the sudsy, golden bounty of the well-manned iron and steel operation below as you enjoy a carefully selected menu that would satisfy even the largest of chief executives.