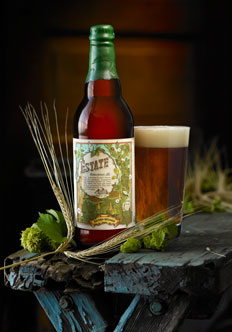 This year, Sierra Nevada released their Chico Estate Ale,renamed/re-branded Estate Homegrown Ale, featuring hops and barley grown on their own grounds, but this time as a Certified Organic ale.  Very few breweries in the entire world actually grow their own hops and barley to the point that they can produce a commercially available batch of beer. It is quite a feat.  Previous beers in the Harvest series have typically retailed between $5 and $7 dollars depending on where you find it. This years waxed dipped, Certified Organic Estate Homegrown Ale is retailing for $10.00, and might be more or less depending where you live.  I know Sierra Nevada has released other premium products this year, in the form of their 30th Anniversary Series, but this particular beer piqued my curiosity as far as price went.

So instead of me making assumptions as to why Sierra Nevada Estate Homegrown Ale is retailing for $10.00, I reached out to Sierra Nevada to find out why a beer they made from scratch costs what it does.  Here is the reply from Bill Manley, Sierra Nevada’s Communications Coordinator.

First off, I would wager, Estate Ale pound for pound, is one of the most expensive beers to produce anywhere in the world. Since our hops and barley fields are located on our property we incur all of the costs it takes to maintain the fields, tend to the crops and harvest the materials by-hand. We have hired full-time, year-round personnel that handle our agriculture, but we are still, by-and-large, inexperienced farmers. Most of the work done for this beer is done by hand. We have brewery employees up in lifts and driving trucks, and sorting hops, and tending fields. All of this adds up.

Commercial hops farm invest millions of dollars in specialized equipment that cuts down on labor and harvests more quickly. We don’t own any of that machinery. We do it old-school with garden shears and machetes. This year, we also had our estate field certified organic both with the USDA and Oregon Tilth, the highest level of organic certification available. In a rough estimate, Ken figured out that it costs us hundreds of dollars for a single pound of hops. Contrast that against the going market rate of $2-$2.50 per pound. That figure doesn’t even include the cost of the barley. This will never be a money-maker for Sierra Nevada. In fact, we lose money every year. Even still, we think the concept is important enough to continue on with the project.

The answer to that is simple…Estate Ale, for us, represents everything that Sierra Nevada stands for. We hold ourselves to a higher standard in the brewing world. We insist on only the finest ingredients available for all of our beers. That is the reason after all these years we’ve never used hop pellets or chemical extracts… We think whole-cone hops taste better. Are they more expensive to maintain? Yes. Are they more difficult to work with? Yes again. To us, the difficulty to maintain is worth it because we find the finished product to be superior.

The same thing can be said for Estate Ale. We’re obsessed with the sense of place in beer. We want our beer to taste like where it’s from. Our Harvest beers (Northern hemisphere and Southern hemisphere) are another example of that the idea of changing one thing and seeing how different that one thing makes a beer versus another. Nobody can claim to make a beer that tastes like our Estate Ale, because unless the hops and the barley are grown here under the same conditions and harvested and handled the same way, it is impossible.

We believe Estate Ale is the final frontier of craft. A beer with the idea of Terroir-of which the wine world is so fond of speaking. A beer with a lineage, a beer with a point of view, and most importantly, a beer with a physical place in the world. This is hand-crafted beer in every sense of the word. And after all, isn’t that what craft beer is all about?

As far as what is “worth it,” that, I’ll have to leave up to the consumer. We understand that times are tight. We understand that $10 is a lot to pay for a bottle of beer. Value is in the eyes of the beholder. It’s hard to accuse Sierra Nevada as being a greedy brewery. We work hard to keeps prices reasonable on all of our products. In general we have a very competitive price-point compared to our peers. This beer costs more to make, so we’re forced to charge more for it. Period.

In the end, I guess it’s up to philosophy. If you think adding another dimension to “local” beer is worth it, than this beer is for you. If you support the idea behind hand nurturing a beer from seed to glass is worth it, then this beer is right for you as well. For us, we’re proud of the beer, and proud of what it represents. Every employee at the brewery contributes to that beer in some way, and each year, as the bottles roll off the line, you can see the smiles around the building grow knowing that “this one is mine!”

I hope that people agree with us, and I hope that this is an idea that people want to grow. If not, I suspect we’ll continue to make the beer anyway, even if only for us here in Chico because this is important, this IS craft.

In closing, it appears that this beer was made with love and passion for the craft beer movement and craft beer drinkers alike. In a time where every penny in our wallet counts, it’s nice of Sierra Nevada to take the time to explain about their more premium products in this kind of detail.