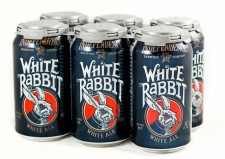 Austin, TX – Independence Brewing Co. is excited to announce that for the first time the brewery will be packaging their popular brew, White Rabbit, in cans. Previously only available seasonally on draught, the Belgian-style white ale is delicately spiced with orange zest, coriander, and peppercorns, bringing out a uniquely refreshing yet robust flavor.

The whimsical can design hints at Lewis Carroll’s classic Alice in Wonderland, with a unique Texas spin (look closely for the “drink me” potion playfully referenced). Currently available in a six-pack format, White Rabbit cans can be found on shelves at select retailers including Specs, Central Market, Whole Foods, and HEB stores in Austin, Houston, College Station and San Antonio. Similar to various other local craft breweries, Independence is working in conjunction with American Canning, a mobile canning operation based in Austin.

“We selected one of our favorite beer releases of last year, White Rabbit for our first can launch because of its innate drinkability and popularity,” states Independence co-founder Amy Cartwright. “Ideally portable for outdoor activities from tailgating to tubing, the new can design will allow locals and visitors to enjoy our beer anytime and anywhere.”

The landmark brewery recently unveiled a massive facility expansion and state-of-the-art brewing equipment upgrade in order to improve production efficiencies and increase distribution. This exciting foray into cans will continue with the next brew in the lineup being the 2014 Good Food Award winner, Independence Pale Ale. All of these exciting developments in 2014 cap off what is Independence Brewing’s 10th anniversary.

In order to celebrate the new can launch, Independence is hosting a social media contest asking fans to post photos of the cans, tag @indybrewing and use #ChaseTheRabbit for the chance to win two tickets to the brewery’s upcoming psychedelic dance party in April as well as a White Rabbit swag bag.